What Is Myofascial Release (And Should You Try It)?

Myofascial release is gaining popularity as an alternative therapy, and there’s some science to show that it can effectively treat certain issues. Here’s what to know before you try your hand at myofascial release. 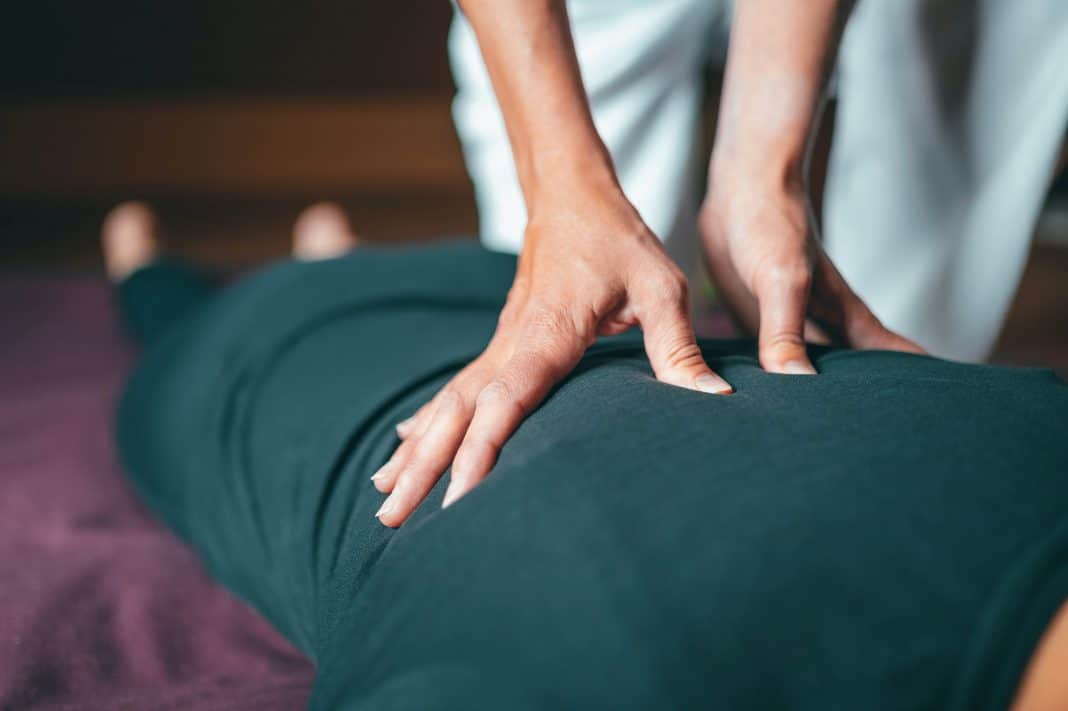 Considering myofascial release? It’s a fairly popular therapy, both for treating certain pain disorders (including myofascial pain) and for promoting recovery after strenuous workouts. We’ve heard a lot of positive things about it and it’s definitely trending in the wellness world, so we decided to research the topic further. “Myofascial release is a broad term that’s used for many forms of applied manual therapy,” Mary Biancalana, president of the National Association of Myofascial Trigger Point Therapists (NAMTPT), tells HealthyWay. “Myo means muscle; fascial is the three-dimensional tissue matrix.” To put it simply—well, as simply as we can—myofascia is a strong, flexible tissue that covers the muscles. Picture a slippery spider web surrounding all of your muscles and bones, and you’re part of the way there. “The myofascial system is a broad term for soft tissue that includes subdermal fascia, which is a three-dimensional matrix that communicates with the muscular and skeletal system,” Biancalana explains. Myofascial release, then, is a therapeutic technique that attempts to relieve pain by massaging and “breaking up” the fascia around certain trigger points: tender areas where the muscle, bone, and fascia interact. Patients might feel pain in these trigger points, but Biancalana says that’s not always the case. “You need to have a particular roadmap for relieving the pain,” she says. “In this trigger point protocol, the massage therapist or practitioner does not just press were it hurts. On the contrary, we use the protocol to find the muscle that is the source of the pain. This muscle can be far away from where the pain is felt.” While the concept of trigger points is somewhat controversial (don’t worry, we’ll discuss that in depth in a moment), myofascial release does seem to have applications in certain situations—provided, of course, that whoever’s administering the treatment knows what they’re doing. Myofascial release is commonly used to treat myofascial pain syndrome. Myofascial pain syndrome (MPS) is a chronic pain condition in which a patient experiences discomfort or pain, which may be misplaced—meaning the pain feels like it’s coming from one part of your body, but it’s actually coming from somewhere else. To diagnose MPS, physicians carefully evaluate patient history and examine muscle tissue for the characteristic “knots” believed to cause the pain. Gently massaging those knots can sometimes relieve the symptoms. While the pain can seem to come from anywhere, patients often experience it around their necks and upper backs. Myofascial pain may be caused by stress, sleep problems, postural issues, repetitive motions, fatigue, a lack of activity, or muscle injury. It might also be related to fibromyalgia, a similar pain condition. MPS is sometimes misdiagnosed as fibromyalgia and vice-versa, but the two conditions can coexist simultaneously, which makes diagnosis and treatment complicated. As myofascial pain syndrome is a fairly new diagnosis, statistics are hard to find, but MPS seems to be fairly common. In one study, researchers examined 172 university students who visited a primary care physician for pain; 30 percent of those patients satisfied the criteria for myofascial pain syndrome. The condition seems to affect women more than men; by one estimate, 37 percent of men and 65 percent of women have symptoms of MPS.

That brings us to myofascial release, a common treatment for MPS.

Is there mainstream scientific support for myofascial release?

Myofascial release therapies seem to work well for some individuals, although there’s limited scientific support for the therapy’s uses. A 2009 report found that traction devices and mechanical massage could provide temporary relief for myofascial pain syndrome patients. The authors wrote that these methods worked by releasing lactic acid, similar to other types of massage. Other research has shown that myofascial release can be an effective short-term treatment for MPS. However, MPS seems to have a number of different root causes, so myofascial release might be more effective when paired with other treatments like soft tissue massage and retraction–extension exercises. Myofascial release is also popular as a post-workout recovery technique, and there’s slightly more evidence to support that application. In a 2015 literature review, authors Allison Schroeder and Thomas Best wrote that self myofascial release (or foam rolling therapy) “appears to have a positive effect on range of motion and soreness/fatigue following exercise,” noting that additional studies would be needed to verify the results. In addition to MPS, myofascial release is a common alternative treatment for temporomandibular disorders (TMJ), chronic headaches, and other disorders related to muscle tightness. While there’s not enough scientific research to support these all of these applications, some studies have shown massage to be an effective treatment for TMJ, and since myofascial release is essentially a form of massage, it stands to reason that it could treat these conditions. Perhaps most tellingly, a 2013 review found studies that both supported and discounted the medical benefits of myofascial release, noting that “overall, the studies had positive outcomes with myofascial release, but because of [their] low quality, few conclusions could be drawn.” In other words, we’d take some of the more dramatic claims with a grain of salt, but we also don’t think that release therapies should be ignored entirely. There’s enough evidence to indicate that myofascial release could reliably reduce pain, and as far as alternative therapies go, it’s one of the more harmless options. There aren’t really any unpleasant side effects, so if it doesn’t work for you, you can simply try something else.

If you’re considering an at-home therapy, we’ve got some good news: As long as you’re careful and you incorporate the therapy gradually, you don’t have much to worry about. “Foam rolling, trigger point release techniques with various tools, massage, and dry needling may all be helpful,” says Chris Gabriel, a personal trainer with orthopedic care practice OrthoCarolina. “The risks from these types of treatment techniques is low, although soreness can be common when starting any program.” Tauberg agrees. “Myofascial release is a conservative rehabilitation technique, and there is very little risk associated with trying this technique,” he says. https://www.youtube.com/watch?time_continue=17&v=RKEjyFs5S-k However, Gabriel notes that myofascial release is intended as a short-term treatment for pain, stiffness, and soreness, not as a long-term solution. “From a research standpoint, long-term benefit from these interventions is not clear,” he says. “Generally speaking, a gradually progressed program of exercise is a superior option.” Additionally, Biancalana notes that patients will often misidentify the locations of their myofascial trigger points, which could limit the effectiveness of self-administered therapy. “This type of therapy works, so long as the trigger point protocol is used to ensure the location of the source of the pain,” she says. She explains that professional practitioners frequently use percussors or heating devices that help them identify the agitated trigger point, and that in many cases, the patient has misunderstood where pressure needs to be applied to address their pain. Another reason to visit a doctor first: Treating myofascial pain syndrome won’t help much if you don’t actually have the condition, and your symptoms may be indicative of another health problem.

Our experts recommend consulting with trained practitioners before attempting myofascial therapy at home. With that said, many practitioners give their patients at-home plans, since the underlying concepts of myofascial release are fairly simple. Here are a few general tips to keep in mind—although, again, we strongly advise that you communicate with your personal trainer or healthcare provider before starting a myofascial release program.

Finding a Myofascial Release Practitioner: What to Know

If you’ve been diagnosed with myofascial pain, you may be referred to or want to find a qualified practitioner. You’ll want to work with someone who is specially trained in myofascial release, but while some organizations offer certifications for the practice, the quality of those programs can vary considerably. Feel free to ask for references, and if you’re planning on paying with insurance, make sure that the practitioner’s credentials are in line with your insurer’s requirements. Typically, insurance providers will cover myofascial release if it is a part of your occupational or physical therapy (so you’ll need a practitioner with some sort of PT or OT credential). However, it may not be covered if performed as massage therapy. To avoid a costly misunderstanding, call your insurance provider before booking an appointment and get clarification. Also make sure that you understand the limitations of this alternative therapy. “For myofascial pain, myofascial release is an effective treatment method,” says Tauberg. “If the source of someone’s pain is not the muscles or fascia, then myofascial release is not the most effective treatment method available. It would not be very effective at treating pain that generates from the nerves or the joints.” As with other forms of physical therapy, you may feel some pain during and after your myofascial release treatment. However, the pain shouldn’t be severe. Speak with a healthcare provider right away if you experience severe pain or other side effects. To limit pain and to improve the effectiveness of the therapy, our sources recommended drinking plenty of fluids before each visit. You’ll also want to communicate with your therapist; give them detailed information about your symptoms and let them know if the treatments feel painful or uncomfortable. According to our sources, patients often feel a sensation of warmth during their sessions, which can be pleasant or unpleasant, depending on the individual. A single myofascial release session can last anywhere from a few minutes to several hours. When you leave, you may immediately feel refreshed, energized, and significantly more flexible, but again, this varies case to case. If you have MPS and myofascial release doesn’t seem to work, don’t give up hope. Over-the-counter pain relievers, antidepressants, and other medications can be effective for minimizing day-to-day pain, although long-term treatments strategies usually include exercise regimens, regular stretching, and posture training. Other alternative treatments include acupuncture, which has been clinically shown to provide modest pain reduction in some patients.

What Is Myofascial Release (And Should You Try It)?