What A Narcissist Says (And What They Really Mean)

Narcissists are expert manipulators, and they'll do just about anything to avoid a bruised ego. Here's what to know (and where to draw the line). 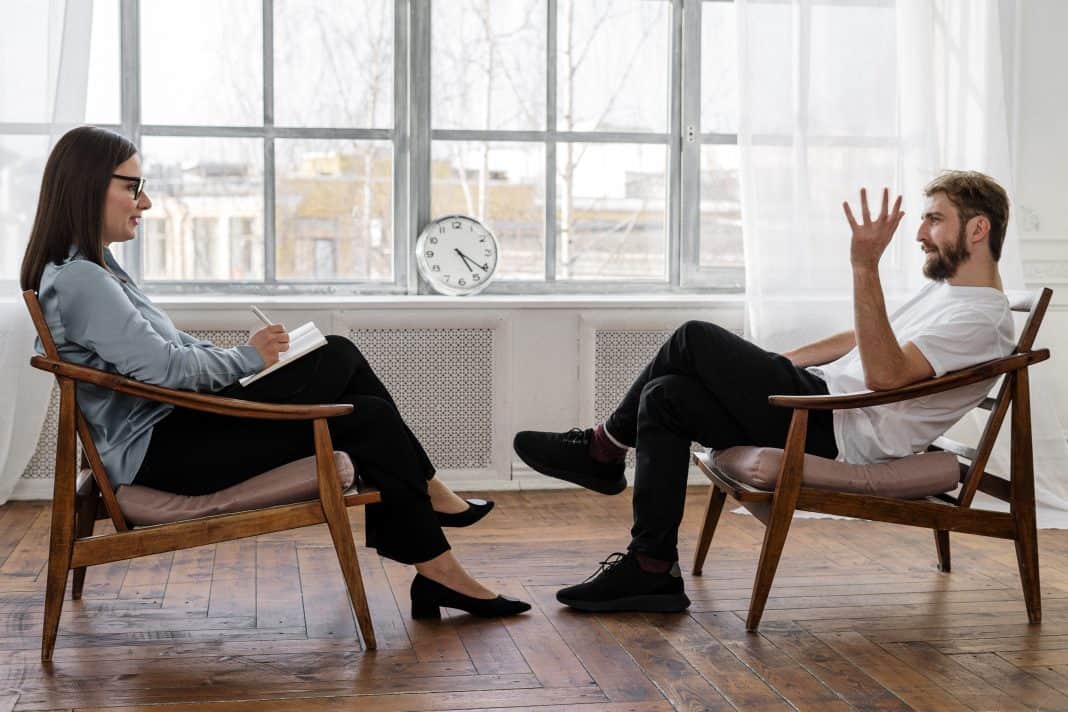 Narcissism is, by most estimations, a rare disorder. According to the Diagnostic and Statistical Manual of Mental Disorders, about 0.5 to 1 percent of people are diagnosed with narcissistic personality disorder (NPD). However, many psychologists believe narcissism is on the rise; the American Psychological Association notes that one major 2008 study found that 9.4 percent of Americans in their 20s had experienced NPD at some point in their lives (compared to a relatively paltry 3.2 percent of people over 65). Regardless, if you’ve ever dealt with a narcissist, you know one experience is more than enough. “People with NPD tend to belittle others in a way that positions themselves as the greater or more important person in their relationships,” says clinical psychologist Sal Raichbach, PsyD, a licensed clinical social worker and chief of clinical compliance at Ambrosia Treatment Center. “In doing this, they can take advantage of those who have more passive personalities and exercise control over that person. Being able to control and manipulate others reinforces the narcissist’s perception that they are all-important.” To be clear, nobody should try to diagnose narcissism without proper training, and because NPD is a spectrum, some people might display narcissistic behaviors without actually having the disorder. With that said, narcissists often communicate in similar ways, and by recognizing certain behaviors, you may be able to curb their influence (or better yet, avoid them entirely).

What they say: “You’re absolutely perfect. I don’t deserve you.”

In romantic relationships, narcissists typically go to great lengths to make their partners feel special. That sounds wonderful—and in many cases, it feels pretty great. “When I first met my partner, I was swept off my feet, as cliché as that sounds,” says Amber, a 28-year-old woman who says she dated a man with narcissistic tendencies for several years. “Everything was about me. The compliments were glowing, and I didn’t notice anything unpleasant or unusual.” Unfortunately, that stage of the relationship doesn’t typically last long. “In a new relationship, a narcissist can appear like an incredibly charming, kind, and [linkbuilder id=”6701″ text=”intelligent person”],” Raichbach says. “These personality traits, whether they are real or manufactured, are a part of their manipulation strategy. Once they have established a relationship, they begin to show their true selves and adjust their manipulating tactics to bullying and belittling others.”

What they say: “Here, I got you something…”

“He gave me gifts throughout the relationship,” Amber says. “That’s something I miss! But in all seriousness, some of [the gifts] seemed overwhelming. We’d only been dating for a few weeks when he got me this tablet that easily cost $500. I chalked it up to his generosity. Looking back, it was a warning sign.” While narcissists might employ a variety of behaviors to woo potential mates, gift-giving seems particularly common—and particularly problematic. A 2016 study found three primary motivations for gift-giving in romantic relationships: intrinsic (in other words, simply showing that a partner is appreciated), maintenance (keeping the relationship going), and power (gaining an advantage over the partner). Narcissists were more likely to give gifts for maintenance or power. “Our results suggest that narcissistic individuals critically differ from those with high self-esteem in their tendency to consider gift giving an instrumental act,” the study’s authors wrote. In other words, because narcissists typically have low self-esteem, they’re more likely to see gift-giving as a necessary activity. Obviously, that’s not a great basis for a healthy relationship. “Narcissists will go to any lengths to get ‘in’ with a person before they begin to show their true colors,” Raichbach explains. “Excessive flattery, gift-giving, and over-the-top kindness are common at the beginning stages of a relationship with a narcissist. However, this isn’t always the case, and sometimes other people are attracted to narcissists because of their intelligence or personality.” In any case, the good times don’t last.

What they say: “I’m the victim here.”

In a conflict, a narcissist will often try to flip the discussion. The other person might hear something like: “Yeah, but what about the time you….” “You do it, too.” “I only did that because you….” In each case, the takeaway is the same: The narcissist’s bad behavior isn’t really their fault. How could it be? They’re nearly perfect. “Even if the argument wasn’t a big deal, he’d make it a big deal,” Amber says. “He was incapable of saying, ‘Sorry, my bad. Let’s move on.’ If I brought up something, he’d counter with something that I did. I’ve been in plenty of relationships where the occasional argument strayed into that territory—with [my partner] bringing up my issues—but with him, it was something else.” We weren’t able to speak with Amber’s partner for this piece, but his actions are in line with typical narcissistic behaviors. “To manipulate and control others, narcissists will often play the role of the victim,” Raichbach explains. “When another person objects to their behavior, they will turn the situation around and act like they are the one that is being mistreated or misunderstood. If the other party feels guilty, they are less likely to challenge the controlling nature of the narcissist and allow them to continue influencing their decisions.” Similarly, narcissists often project their own faults onto their partners. That can make for some frustrating arguments. “Projection occurs when an individual attributes a characteristic that they see in themselves onto another person,” Raichbach says. “It’s a defense mechanism that is used by narcissists, most often after they have suffered some blow to their ego. By shifting the blame from themselves onto another person, they both feel better about themselves and have fuel to continue their narcissistic behaviors.”

What they say: “You should be ashamed about…”

As a narcissist becomes more comfortable in a relationship, he (or she, but statistically speaking, most narcissists are male) will often key in on his partner’s insecurities. This is often the point where the non-narcissist realizes something’s wrong. “Bullying and demeaning others is a favorite manipulation tactic of narcissists,” Raichbach says. “Often, narcissists will get to know you well enough that they can target the insecurities that they know have the most effect. They also might attempt to conceal or downplay the severity of their abuse by including compliments with their attacks.” Some research (link opens a PDF) suggests that men use insults as a broader strategy of mate retention—in other words, insults are sometimes an effective (but by no means healthy) part of relationship maintenance. Amber says that’s what’s so frustrating about these tactics; ultimately, narcissists use them because they work.

“The best way to deal with a narcissist is to recognize and accept their criticism and bullying comes from a place of insecurity, and therefore isn’t valid.”

—Sal Raichbach, PsyD
“He really damaged my self-esteem,” she says. “He knew what made me self-conscious, and he wasn’t above using my insecurities to his advantage. But I stayed with him—in fact, it took me a while to date anyone else after our relationship ended. I didn’t think I was good enough. I guess I can blame him for that.”

What they say: “I’m sorry. I’m going to change. It won’t happen again.”

At this point, we should acknowledge an important point: Narcissists aren’t sociopaths. They’re typically capable of empathy, and when they realize they’ve made a mistake, they may offer a sincere apology. Unfortunately, that doesn’t mean you should accept that apology. “Narcissists live in a world where everything revolves around them, and as a result, they put their needs first,” Raichbach says. “Someone who is in a relationship with a narcissist, whether that be a romantic relationship, a friendship, or a co-worker, should know that they are not going to be able to fix or change that person’s behavior.” While apologies might sound convincing, they’re worthless without real change, and narcissists aren’t always capable of changing on their own. That’s not to say that the situation is entirely hopeless, but be careful when approaching a person with narcissistic tendencies; don’t use terms like “narcissist,” and try to empathize with the motivations behind their actions. “When approaching a narcissist about their behavior, it’s best to tread lightly when expressing your concern,” Raichbach says. “It’s important to realize that this kind of behavior comes from a place of insecurity and low self-esteem, and will typically become defensive when someone tries to call out their narcissistic behaviors.” “The best way to deal with a narcissist is to recognize and accept their criticism and bullying comes from a place of insecurity, and therefore isn’t valid,” he adds. “The narcissist only wins when an individual believes that they are inferior to that individual.” If you really want to help a person with narcissistic behaviors, try to gently guide them toward therapy. Consider relationship counseling with a trained, certified psychologist who may be able to recognize the [linkbuilder id=”6700″ text=”signs of narcissism”]. Of course, there’s always another option: You could simply end the relationship. If your partner isn’t prepared to get help, that’s sometimes the only realistic course of action. “Narcissists can get better through therapy, but typically they are resistant to treatment because they do not recognize their behavior as a problem,” Raichbach says. “The only way for a person with narcissistic tendencies to get help is to want it themselves.”