Busting Prenatal Ultrasound Myths: What to Know Before You Go

Sonograms are said to create sound "as loud as a subway train" from a fetus's perspective. We looked into the science. 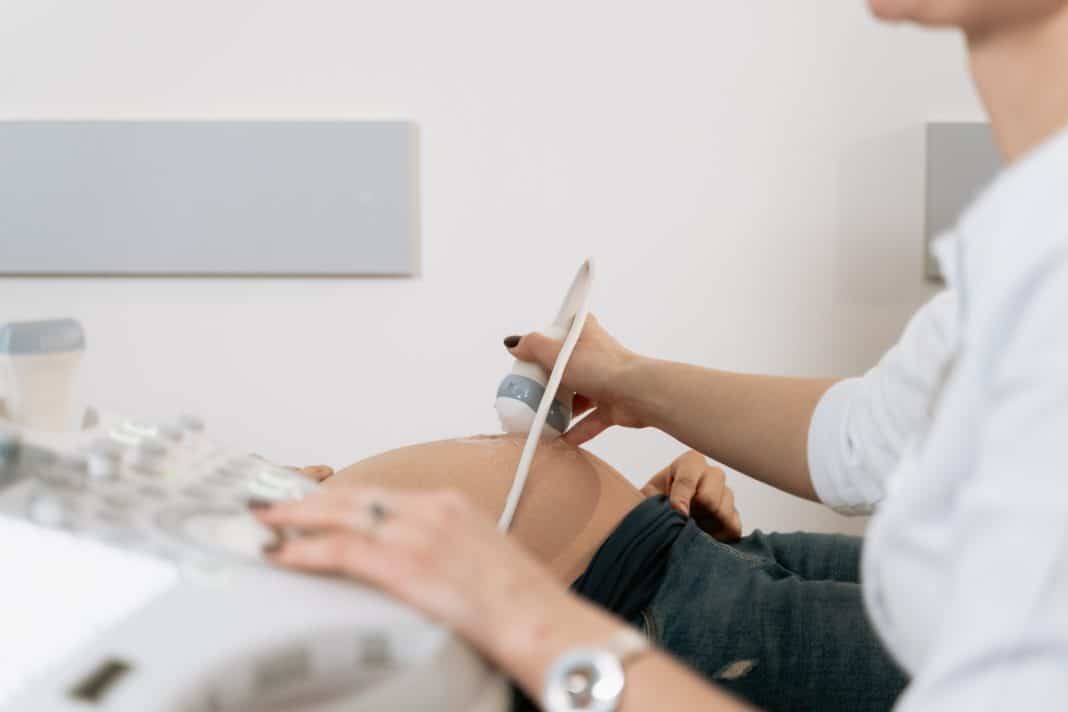 When you’re expecting, you spend a lot of time worrying—particularly during your first pregnancy. “I read everything I could get my hands on,” says Mary, a 27-year-old St. Louis resident who had her first baby last April. “I was really obsessed with things like nutrition, but I never second-guessed ultrasounds. Then, on [social media], one of my friends posted an article about how fetuses can hear during ultrasound examinations, and that got me thinking.” In fact, dozens of publications carried the story, in which ultrasound equipment was said to be “as loud as a subway train coming into a station” to the fetus. That sounds alarming, so we decided to look into the science. Spoiler alert: Ultrasounds are completely safe when performed by properly trained professionals. However, some of the enduring myths surrounding ultrasounds deserve some attention. [Editorial note: Ultrasound is the name for the procedure itself, while sonogram is the name for the image produced; as we use both terms throughout this article somewhat interchangeably, we felt some clarification would be helpful for anyone unaware of the distinction (we certainly weren’t aware of it when we started researching).]

“Fetal ultrasounds can cause hearing problems in babies.”

On the surface, this myth sounds sensible; ultrasounds use acoustic waves of energy—in other words, sound—to create images. We also know babies can hear sound (and even learn words) in the womb. Wouldn’t a tremendous amount of sound pose some sort of danger? While ultrasounds might be audible for newborns, there’s absolutely no evidence that they’re dangerously loud. In fact, ultrasound equipment uses high frequencies not audible to adult or infant ears. They can potentially stimulate vibrations in the uterus that could be problematic, according to the Mayo Clinic’s Mostafa Fatemi, but not dangerous to the fetus’s developing ears, provided the equipment is used properly by trained medical professionals. Fatemi, by the way, is the source of the “louder than a subway train” comment, but that was taken out of context by some publications; Fatemi was warning that excessive levels of high-frequency sound might cause a fetus to move in the womb, potentially leading to complications. He wasn’t concerned with potential hearing loss, and subsequent studies have shown that ultrasounds don’t pose that type of threat. In 2013, a group of researchers attempted to establish a link between prenatal ultrasounds and hearing loss, noting that the implications for public health would be “enormous” if such a link was found. The study looked at postnatal hearing tests, comparing babies who’d had ultrasounds to babies who hadn’t undergone the procedure. “Our results show that there is no correlation between a higher level of prenatal ultrasound exposure and hearing loss,” the authors concluded. “Indeed, infants who had more prenatal ultrasounds in the third trimester were more likely to pass their screening hearing exams.” That would seem to indicate that ultrasounds actually help infants’ hearing, but the researchers warned against making that conclusion, noting that correlation doesn’t imply causation. In any case, the takeaway is clear: Ultrasound equipment, when used properly, is perfectly safe for your baby’s ears.

“Sonograms are loaded with dangerous radiation.”

Many mothers-to-be wonder why they should expose themselves to any medical imaging equipment. Don’t those things expose your body (and, therefore, your baby’s body) to dangerous radiation? In a word: Nope. “There is no radiation involved,” explains Resham Mendi, MD, a radiologist with Bright Light Medical Imaging. Certain other medical imaging technologies (specifically, CT scans) use ionizing radiation, which could conceivably damage DNA, causing diseases like cancer. Medical professionals go to great lengths to minimize those risks—but because ultrasound equipment uses sound, not x-rays, it doesn’t pose the same type of danger. The sound waves simply aren’t capable of damaging DNA. By the way, ultrasounds generate images pretty much instantaneously, which is why they’re more effective than CT scans or MRIs for prenatal care. “Ultrasound allows us to see things inside the body as they move,” Mendi says. “This is why we can evaluate the motion of the heart, of a fetus, or of a needle that a doctor may be inserting for a biopsy. Normally, it’s a completely safe and pain-free process.”

“The FDA recommends against fetal ultrasounds.”

Some sites note that the FDA advises against unnecessary prenatal ultrasounds. This is actually partially true, but it requires some context. The FDA did release a consumer update advising against “keepsake” sonograms and, in the accompanying online materials, warned about the dangers of those ultrasounds. “Although there is a lack of evidence of any harm due to ultrasound imaging and heartbeat monitors, prudent use of these devices by trained health care providers is important,” Shahram Vaezy, PhD, an FDA biomedical engineer, said in a statement. “Ultrasound can heat tissues slightly, and in some cases, it can also produce very small bubbles (cavitation) in some tissues.” However, the FDA’s report is specifically geared toward vanity sonograms—which, by definition, aren’t medically necessary.

“Although ultrasound is safe during pregnancy, physicians are discouraged from performing vanity ultrasounds if they are not needed, as it exposes the fetus to additional ultrasound energy with no medical benefit.” —Janelle Cooper, MD, obstetrician

“I have some patients who have gone on their own to commercial ultrasound centers offering so-called ‘vanity’ ultrasounds or for 3D ultrasounds to get pictures of their baby’s face,” Janelle Cooper, MD, Fellow of the American Congress of Obstetricians and Gynecologists, and obstetrician at Mercy Medical Center in Baltimore, tells HealthyWay. Why would someone want a 3D ultrasound? “Not all patients need a 3D ultrasound, so it is not typical to have it done for medical purposes, but many patients are anxious to see what their baby looks like, and with 3D technology—it does provide a rough image of the baby’s face,” she says. That does sound pretty cool. Alas, if a 3D ultrasound is unnecessary, it’s not worth the (incredibly small) risk. “Although ultrasound is safe during pregnancy, physicians are discouraged from performing vanity ultrasounds if they are not needed, as it exposes the fetus to additional ultrasound energy with no medical benefit,” Cooper says. “In addition, patients may get these ‘vanity’ ultrasounds and be falsely reassured that their baby is healthy, and many of these ultrasounds are not done by qualified sonographers who have experience with obstetrical ultrasounds. The ACOG [American College of Obstetrics and Gynecology] has issued guidelines for use of ultrasound in pregnancy, which state that exposing the fetus to ultrasound energy without medical benefit is not justified.” In other words, while you might really, really want to see your baby’s adorable face a few weeks early, resist the urge to book an extra appointment at the sonographer’s office. Hey, relax; you’ll get to take much better pictures once your baby is actually, you know, born.

It’s helpful to understand how sonograms are used (and why they’re important).

We ask Cooper whether a physician might recommend against ultrasounds for any reason. “I do not believe there is any evidence to show that sonograms are not safe during pregnancy,” she says. “As an obstetrician, there is no reason why I wouldn’t recommend ultrasound during pregnancy, as it has been proven to be safe, and generally, no harm can come to the baby with multiple ultrasounds during pregnancy.” All medical procedures carry some amount of risk, and ultrasounds are no different. According to the ACOG, no research indicates that ultrasounds present any danger to a developing fetus, but that might change at some point in the future, so physicians try to avoid using the technology unnecessarily. At this point, the benefits of ultrasound technology seem to greatly outweigh the known risks. “Ultrasound is a tool that we use to help determine how the pregnancy is progressing, to evaluate the baby’s growth, anatomy, and wellbeing overall, and to monitor the placenta for any changes that may prove dangerous to the pregnancy,” Cooper says. We had to ask: Why are sonograms really necessary, and how many should a mother expect to have during pregnancy? “Generally, during pregnancy, I recommend an ultrasound in the first trimester to help determine due date in comparison to the last menstrual period,” Cooper says. “I recommend this ultrasound starting at around six weeks. There are times when I may recommend an earlier ultrasound if there is any suspicion of possible miscarriage or to confirm that it is not an ectopic pregnancy, and even this [is safe] early on when the ultrasound is done transvaginally.” “In a normal pregnancy, the next ultrasound is usually done at 18 to 20 weeks for a full anatomy evaluation, as well as gender determination. I recommend patients get ultrasounds done at least three times minimum during pregnancy, once per trimester, as overall, ultrasounds will help determine fetal growth, anatomy, placental abnormalities, gender, presence of [twins or multiples], the location of pregnancy, and the size [and] weight of the baby.” Ultrasounds help doctors—and mothers—prepare for a healthy delivery. While the technology can seem somewhat overwhelming, and the procedure itself is a bit uncomfortable (okay, really uncomfortable), that’s no reason to ditch the sonogram entirely. Just ask someone who’s been there. “I totally get why people are anxious about sonograms,” Mary says. “But they do give you a sense of relief, and after doing the research—there’s no real reason to worry.”