8 Unspoken Ways Life Is Different For Men And Women, According To Science

No, you're not going crazy when you disagree with your S.O. about the thermostat setting. 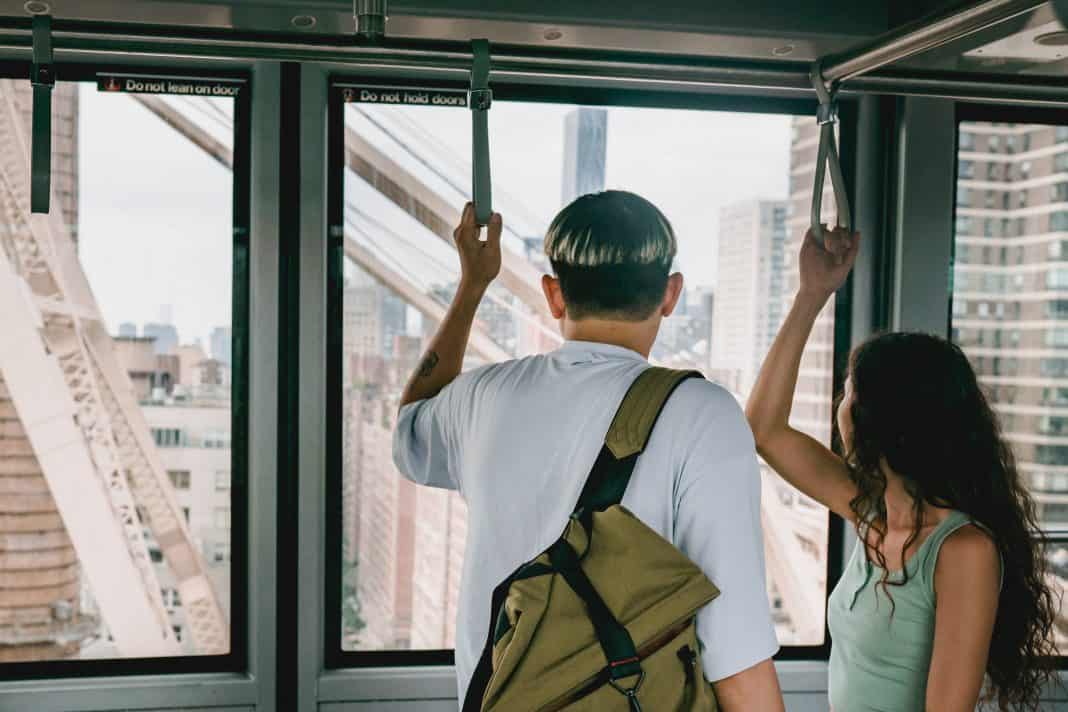 Some experiences are pretty much universal. We’ve all stubbed our toes in the middle of the night, argued with our parents, and left food in the oven just a bit too long. These experiences present themselves to people regardless of biological makeup. But the sexes (and genders) experience some things quite differently due to distinct social structures, psychology, and physiology. Science backs that up; while we’re very alike in some ways, we couldn’t be more different in others. Don’t worry, we’ve got plenty of examples. For instance… Note: We’ll use the terms “male” and “female” when discussing matters of biological sex. When discussing gender matters, we’ll use “men” and “women.” When the line blurs between gender and biological sex, as it often does, we’ll use “men” and “women.”

1. Females are much more likely to feel cold in office buildings.

If you’ve ever listened to your male and female coworkers argue about the thermostat day in and day out, we’ve got some news: Science says they’re both right. In a Nature Climate Change study from 2015, researchers Boris Kingma and Wouter van Marken Lichtenbelt said that females feel colder than males due to differences in metabolic rates. Unfortunately, indoor climate regulations “are based on an empirical thermal comfort model that was developed in the 1960s. Standard values for one of its primary variables—metabolic rate—are based on an average male, and may overestimate female metabolic rate by up to 35%.” Females generally have higher core body temperatures than males, and as counterintuitive as it might sound, a higher body temperature makes changes in room temperature more noticeable. One study also suggested that oral contraceptives could raise body temperatures for young women. For females, that means that it’s hard to simply “adjust” your body to the ambient temperature of a chilly office environment. Your biology is working against you—you’d better dress in layers (or figure out how to lock the thermostat). “This may cause buildings to be intrinsically non-energy-efficient in providing comfort to females,” wrote Kingma and Lichtenbelt, arguing that by forgoing the one-sex, antiquated model in favor of using actual metabolic rates, we can save some money.

Jim Horne, a sleep neuroscientist from the United Kingdom, wrote a book called Sleepfaring that explains the science of sleep (although several Amazon reviews suggest that the book’s dry tone tends to make readers drift off). One of Horne’s revelations: On average, women sleep about 20 minutes longer than men do. Since 2010, numerous websites have quoted him as saying that women “need” more sleep than men, but that’s not quite true; he simply said that they tend to take more sleep. In 1995, researchers polled 400 adults and found that females fell asleep earlier than males and slept longer on average. They also reported more sleep disturbances, however, which is concerning, since a Duke University Medical Center study showed that poor sleep is significantly more dangerous for females. In that study, females who slept poorly reported greater feelings of depression, anger, and hostility than men. Women were also more likely to develop health issues as a result of their sleep disturbances. “Interestingly, it appears that it’s not so much the overall poor sleep quality that was associated with greater risk, but rather the length of time it takes a person to [linkbuilder id=”6716″ text=”fall asleep”] that takes the highest toll,” said associate professor Edward Suarez, one of the authors of the study. “Women who reported taking a half an hour or more to fall asleep showed the worst risk profile.”

Women often get a bad rap for being picky with colors—I said to bring me my ocean-blue dress, not the sky-blue one—but there might be a biological reason behind ladies’ choosiness. Some scientists believe that in early hunter-gatherer societies, women took on the latter role. As a result, they had to be attuned to minor variations in color, since a bright-red berry might be dangerous, while a pale-red berry could be perfectly edible. Males are also more likely to be colorblind. Most forms of colorblindness are carried on the X chromosome. Females have a two X chromosomes, so they can carry the gene for colorblindness on one X but have it cancelled out by the other. Males have an X and a Y, leaving them defenseless if they get the gene—as a result, 8 percent of males with Northern European ancestry are colorblind. Of course, that doesn’t mean that males can’t distinguish between shades of a color; social conditioning certainly plays a role. Still, females often have a genetic advantage in this department.

A study published in the Biology of Sex Differences found that men are generally better at picking out moving objects from a distance. Brooklyn College psychology professor Israel Abramov led the study, and he believes that it supports the idea that males and females built separate evolutionary advantages for their roles as hunters and gatherers, respectively. Males who could see fast-moving objects could be better hunters, just as females who could discern between shades of color could be better gatherers. From birth, males have more development in the visual cortexes of their brains than women, partially due to the fact that they have more testosterone. As a result, they often have better evolutionary makeup for developing skills like hand-eye coordination. Once again, we’re talking about averages—some women are just as good as men at seeing details and rapidly moving stimuli.

5. Women are more likely to be religious than men.

Gallup polls show that women are generally more religious than men and that they “practice their faith more consistently … and work more vigorously for the congregation.” Gallup goes on to note: “In fact, gender-based differences in responses to religious questions are far more pronounced than those between any other demographic categories, such as age, education level, or geographic region. “The tendency toward higher religiosity among women has manifested over seven decades of scientific polling, and church membership figures indicate that it probably existed for many decades prior to the advent of survey research in the mid-1930s.” George H. Gallup, Jr., a senior staff writer at the polling organization, posited that societal differences between men and women might be responsible for the difference. Women are expected to be caregivers, he said, and they may feel more responsible for their children’s moral development.

6. Yes, males are affected by the flu (and certain other illnesses) more than females.

The whole “man flu” phenomenon probably isn’t just guys acting. Research shows that male and female bodies react to viruses differently. Studies on rats showed that males often have more fevers, more fluctuations in their body temperatures, more inflammation, and longer recovery times. Of course, humans aren’t rats—well, most of us, anyway—but studies with human cells tend to back up these results. Oddly enough, men might react poorly to viruses because their immune systems overreact. “It isn’t always the presence of the microbe or the presence of the virus that makes us sick,” said Sabra Klein, associate professor of molecular microbiology and immunology at Johns Hopkins Bloomberg School of Public Health, in an interview with Time. “It’s our immune response, and the research shows that males have a heightened response that summons cells to the site of infection, which contributes to the overall feeling of sickness.” So, what’s the biological reason for the “man flu”? The research isn’t clear, but many scientists believe it’s a function of different levels of testosterone and estrogen. According to the theory, women need to be able to recover more quickly in order to care for children. Another theory suggests that men simply don’t wash their hands as often. In any case, it’s worth noting that this effect doesn’t extend to all illnesses, as women are significantly more likely to develop autoimmune disorders.

7. Women are more likely to donate to charity than men.

This seems to be true across all age groups, although it’s especially notable among older individuals. One study showed that “baby-boomer and older women gave 89 percent more to charity than men their age, and women in the top 25 percent of permanent income gave 156 percent more than men in that same category.” If you’d like to bring the whole “nurturer” angle into play, you could say that this is because women see themselves as caregivers and feel more of an incentive to give. However, Debra Mesch of the Women’s Philanthropy Institute at Indiana University believes that women are more predisposed—socially or biologically—towards altruism. “Our research has found that women tend to be more altruistic and empathetic than men,” Mesch wrote in The Wall Street Journal, “partly because of the way men and women are socialized regarding caring, self-sacrifice and the well-being of others.” She also found that women and men donate for different reasons. Men, Mesch wrote, are more likely to respond to an appeal that is “in the man’s self interest,” while women “tend to give to promote social change or help others who are less fortunate.” Again, that likely goes back to cultural expectations and gender roles, not biology—an important distinction when we’re discussing gender differences.

Here’s where we have to be really careful about enforcing stereotypes. Women don’t necessarily speak more than men, contrary to popular belief (and several websites quoting this same study), but they do tend to talk to coworkers more frequently. A study published in Scientific Reports looked at 37 women and 42 men, all master’s students. The women talked more with their fellow students when trying to complete a project. However, they didn’t talk more than their male counterparts during their lunch break, perhaps because the break was a more casual situation. When the study was expanded to a larger group, women tended to talk more in both situations, but not by a large margin. So, does it mean anything that women are more talkative in certain social scenarios? Possibly, but it’s important not to make broad generalizations, according to the researchers who ran the study. The main conclusion of the study is that context matters, especially in science.