#IHadAMiscarriage: Ways To Cope And Rituals That Can Help In Grieving The Loss

Denying or dismissing pregnancy loss is a lonely experience. We spoke with women who told us how they coped with this singular kind of grief. 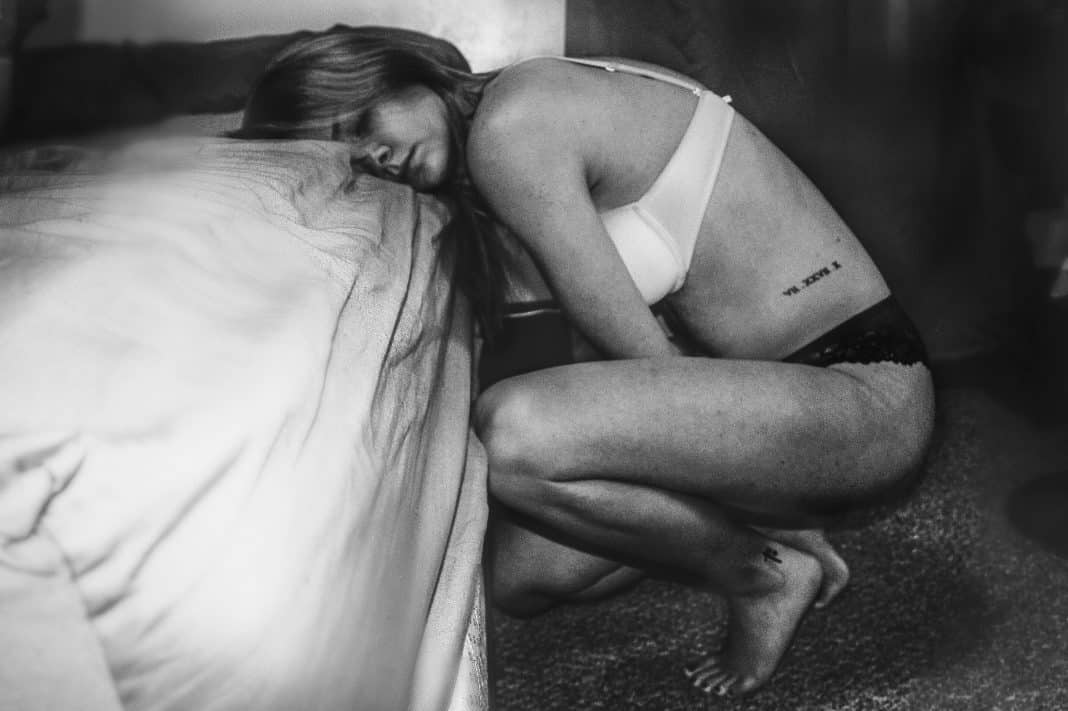 “I could barely feel my feet on the ground.” Jessica Zucker remembers the painful physical and psychological aftermath that accompanied her pregnancy loss at 16 weeks back in 2012. She describes it as an elongated nightmare she was unable to wake from. “The resulting grief was unfathomable,” the Los Angeles–based psychologist tells HealthyWay. Last month, singer Carrie Underwood opened up about her own struggle with multiple miscarriages—a subject that’s often treated as taboo by society at large. Approximately one in five women will have a miscarriage in early pregnancy (typically defined as a loss prior to 20 weeks gestation), and 1 in 100 women will experience a stillbirth each year in the United States. What these numbers don’t account for, however, are those pregnancy losses that go unreported—and that leave behind an indelible mark. “It is a loss different than any other,” says Talya Knable, a licensed clinical professional counselor from Baltimore. “You are left to grieve this person you never had the chance to meet, but perhaps felt closer to than any other person you have ever known.” Even after opening up, many are faced with the unbearable burden of learning how to process this singular kind of grief. We’ve reached out to women who were willing to share their stories. Here is what they had to say.

Angela Roeber, a mother who has gone through five miscarriages, vividly recalls the isolation she felt after her first pregnancy loss. One particular moment that stands out for the 39-year-old involves calling her mom crying and telling her about her miscarriage. “I know I caught her off guard as she didn’t even know I was pregnant,” says the Nebraska resident. But instead of receiving the consolation she craved, Roeber’s experience was normalized. “I remember her telling me, ‘It happens, Angela.’” “Not really what one would like to hear in the moment,” she admits. “We don’t hear a lot of people talking openly about miscarriages as we do with other losses in life, and it can make women feel incredibly alone,” says Julie Gurner, PsyD, a clinical psychologist in the greater Philadelphia area. But even when people do speak out, they can be quickly silenced. [pullquote align=”center”]“As women, mothers, wives, we put a lot of pressure on ourselves. We don’t allow for much grace.” —Angela Roeber[/pullquote] “I don’t think my family understands my pain,” Roeber explains. “They haven’t had the same experiences. I don’t think they see it as losing five babies—instead, they see five miscarriages.” According to Mayra Mendez, PhD, LMFT, a licensed psychotherapist in Santa Monica, California, when a miscarriage occurs, people try not to talk about it. But, she stresses, the loss of a fetus is no less impactful than the loss of any other loved one.   “As women, mothers, wives, we put a lot of pressure on ourselves,” Roeber says. “We don’t allow for much grace.”

Give yourself permission to grieve the loss.

Working through grief is a process.

“Grieving the loss of an unborn baby is a complex, multifaceted experience that changes over time and varies from person to person,” Mendez affirms. Often women put pressure on themselves to be perfectly put together quickly, Gurner adds. “Miscarriages can be a devastating loss—be good to yourself, go easy on yourself, and give yourself the time you need to grieve.” Here are a few methods for coping, shared by experts and women who have been there:

The Healing Balm of Shared Experiences

A woman who experiences a miscarriage needs support and a safe place to talk about her feelings. It’s important to have a forum to speak freely with trusted people, Mendez insists, and to gain perspective that supports clear thinking and prevents misplaced guilt and blame from taking root. “It helps when I read other stories from women who have experienced similar events,” says Roeber. “I know they understand, and I know that I am not alone.”

Self-Care for the Mind and Body

Attend to healthy eating and exercise routines, Mendez advises. “Indulge in reading that book that you have been eyeing, go see that movie or play that will free your mind of stress for a while.” Recovery from the miscarriage will also involve physical self-care, she says, and more importantly, management of emotional health and traumatic stress.

Denying, dismissing, or explaining loss and sadness away impedes grief resolution. This, in turn, can lead to profound and enduring symptoms that may require a higher level of intervention. According to Mendez, if depression and despair remain as powerful six months after the miscarriage experience as they were when the loss was new, then professional help is necessary. “Unresolved grief can become a more serious condition of depression that calls for treatment.”

Mendez emphasizes we shouldn’t isolate from our partners and families. Rather, it’s important that we continue to communicate and share our thoughts. “Join forces and use the experience to strengthen and bond the relationship further,” she notes. “Discuss plans for the future and acknowledge that the grief process is not solely the experience of the woman.” She shares that “men grieve the loss of a baby as well, albeit differently.” Overall, she asks that we keep in mind that working through our grief is a process that will take a great deal of time and reflection.

For some, participating in a ritual such as creating a memory book, planting a tree, or lighting a candle can be a way of honoring their loss. “A mother’s love can’t be measured in weeks,” says Roeber, who wears a charm bracelet with the birthstones of all the babies she’s lost. That said, she’s adamant that everyone should find their own way of processing their grief. “No two people are the same, and I am convinced no two situations are the same.”

Finding a voice in the darkness.

Four months after her miscarriage, Zucker lived on pins and needles when she discovered she was pregnant again. She describes it as an exercise “in mind-numbing uncertainty”—an ongoing oscillation between hope and anxiety. “I was emotionally whiplashed,” she says. The world seemed lopsided and nonsensical. “I wondered if this traumatic event and my resulting cracked heart would drain the poise out of me for good.” It was then that Zucker found herself catapulted into what she calls a “new galaxy of empathy.” While she had worked with women for over a decade in her private practice, she discovered a new breadth of understanding from her own lived experience with tragedy. “I was humbled and honored to suddenly, in a corporeal sense, be able to empirically grasp the profound pain of reproductive loss,” Zucker shares. Two years after her miscarriage, in 2014, she launched the #IHadAMiscarriage campaign and took her pain to pen in a New York Times essay that reverberated across the country. Zucker says the act of writing has been a ritual and a central catalyst in her grieving process. “As a psychologist, I feel like I should probably say that therapy was the most helpful part of my healing process, but I really think that I wrote my way back to health.” That said, she doesn’t dismiss the vital role therapy has played in supporting her process. It provided a much-needed haven for her to fall apart, she says, and to explore the crevices of pain, anxiety, and relational disappointments. “But as I wrote about my experiences, I found understanding and with it a community.”

#IHadAMiscarriage: A Campaign That Breaks the Silence

This October’s Pregnancy and Infant Loss Awareness Month, Zucker’s campaign is focusing on rites, rituals, and representation. “Without standardized rituals, women and families are unsure where to take their pain, how to find peace within it, and sometimes begin to question whether or not they have the ‘right’ to grieve,” says Zucker. But one thing is for sure, women want to acknowledge their losses, she explains, “and the way they do that—the way they each mother their dead children—is different.” For every grieving parent decorating a gravesite or getting a memorial tattoo, she says, there’s one who prefers not to lend any more tangibility or permanence to their loss. As part of her goal to inspire women to find meaningful ways to represent their experiences of miscarriage, Zucker highlights the need for our culture to embrace a framework that allows for grieving and honoring ourselves and the babies we’ve lost. She asserts that in moving away from the antiquated silence whilst moving toward a culture of openness, representing our stories becomes tantamount. “Women want to feel heard; they want to feel seen; they want to feel understood.” https://www.youtube.com/watch?v=sQcGauoAHNM Zucker and Mexico City poet and artist Jessica Lakritz collaborated to stage a breathtaking photoshoot that includes women who’ve experienced miscarriage posing with inspirational poetry written on their skin. Zucker said this project is part of her efforts to destigmatize speaking out about pregnancy and infant loss. “The photo and video shoot captured the importance of this by way of expressing on our bodies our reproductive histories,” Zucker says. “I couldn’t have asked for a more potent salve than that of perfect strangers’ vulnerability,” she added. “Connecting through heartache gave way to hope.”

Cindy Lamothehttp://cindylamothe.com/
Cindy Lamothe is a biracial writer living in Antigua, Guatemala. She has written about health, wellness, and psychology for The Atlantic, BBC, The Cut, Shondaland, The Guardian, Quartz, Teen Vogue, and The Washington Post, among other publications. Visit her site to read more of her work.