How Women Ended Up Removing Hair From Their Entire Bodies: A History

Why do women shave everything nowadays? From cavemen to Charles Darwin to 20th-century advertising, we explore the reasons we're compelled to be hair-free. 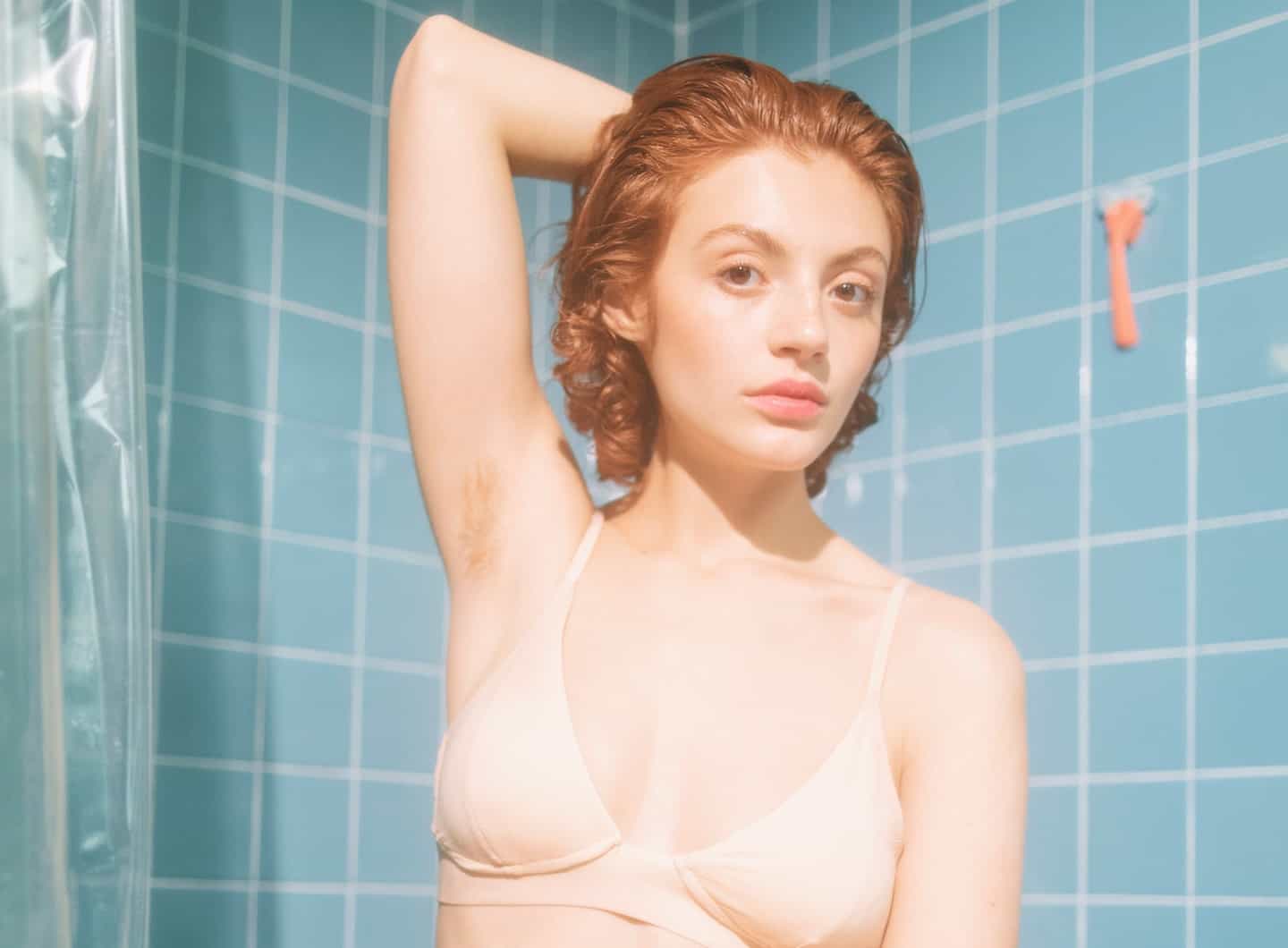 Hair removal is annoying. It’s tedious, painful, and unnecessary—we’d do just fine if we kept our body hair intact. Still, if you’re a woman, there’s a good chance that hair removal is an essential part of your routine, despite the fact that it’s clearly unnatural. Evolution gave us hair, right? Why do we immediately want to get rid of it? And what explains the rising and falling trends of women’s body hair throughout the centuries? Well, there’s no simple answer, but the history of hair removal is pretty fascinating. For starters…

Hair removal has been around for a long time—probably longer than you’d expect.

We don’t know why people started removing their hair, although we can hazard a few guesses. Hair can hold in freezing water and parasites, and it’s a major disadvantage in a fight. The (wonderfully titled) Encyclopedia of Hair notes that beards were particularly dangerous in battle, so naturally, men began looking for alternatives. Archaeologists have discovered cave paintings that show prehistoric people shaving, although they didn’t exactly have Gillette Mach 3 technology; they used clamshells, shark teeth, sharpened volcanic glass, and simple flint knives to accomplish the task. Humans have been shaving since at least 6000 B.C., although razors didn’t really catch on until the Bronze Age (around 3000 B.C.). That’s when humans started using razors made of—wait for it—bronze.

Ancient Egyptians would shave their entire bodies, according to History Undressed. The reason? Well, the desert is hot (shocker, we know), and Egyptians saw body hair as “uncivilized.” While they’d leave their eyebrows in place, upper-class people would get rid of just about everything else. They had basic depilatory creams made with quicklime, although in a pinch, they could also grind the hair down with pumice stones (ouch). Meanwhile, in certain Middle Eastern countries, a bride’s attendants removed all of her hair the night before the wedding, except for her eyebrows and the hair on her head. In ancient Greece, people generally left the hair on their heads intact, but sometimes cut the hair on their bodies and faces. Not only was “manscaping” common, it was frequently referenced in Greek art, including the Aristophanes play Thesmophoriazusae, which contains a humorous (though very crude) scene about the practice. We know from Greek art that complete hair removal was more common for women than men, and men who went completely hairless were seen as effeminate. Ancient Romans also valued hairless women, according to the poetry of Ovid, who wrote these remarkably romantic lines: How near I was to warning you, no rankness of the wild goat under your armpits, no legs bristling with harsh hair! We’re swooning. In any case, other ancient Roman art depicts women with hairless bodies (while Roman artists didn’t really shy away from showing body hair on men), so we know that hair removal was somewhat gendered by this point. So, what did people use to remove their hair at this point? They’d sometimes singe it off—try not to think about how ancient Rome must have smelled—or pluck out the hairs one at a time with seashells or other implements. Shaving was common, but not exactly comfortable, since sharp blades were expensive.

Modern hair removal practices might have Darwin to blame.

Yes, that Darwin. According to author Rebecca Herzig’s Plucked: A History of Hair Removal, Charles Darwin’s Descent of Man inspired a scientific obsession with “racial differences,” including differences in hair growth. (Nevermind the fact that, from a genetic standpoint, race doesn’t exist in humans.) The idea quickly spread, and the public latched onto the idea that body hair could show the genetic superiority—or inferiority—of a person. As Herzig writes, 19th-century scientists thought that thick hair was “linked to criminal violence … and exceptional ‘animal vigor.'” Suddenly, hairlessness was en vogue for Western women. That’s about the time that advertisers got involved.

Despite the Darwinian influence, leg and underarm hair wasn’t much of a concern for women in the early 1900s. “Clothes were so concealing that it was rare to see bare legs or underarms, so removing hair there wasn’t an issue,” Phil Edwards writes for Vox. “Before the 1910s, depilatories for those areas were used primarily by actresses or dancers, or for surgery.” But in 1915, Harper’s Bazaar began running ads for underarm hairlessness among women wearing the popular fashions of the time, like Greek- and Roman-style sleeveless dresses, and presumably, it was ads like these that got into people’s heads as the fashions changed (which is somewhat ironic, given the history of hair removal in ancient Greece). As dresses began to shrink, women began discovering more unseemly hair. Advertisements played on insecurities, and in 1915, Gillette introduced the Milady Decollete, “the first razor designed and marketed specifically for women, and was billed in the extensive national advertising campaign as the ‘safest and most sanitary method of acquiring a smooth underarm,'” per author Russell B. Adams Jr. We should note that not everyone agrees with the idea that shortening skirts caused body hair trends to change. “It is not clear when women began shaving their legs,” The Economist insists. “One idea, almost certainly wrong, is that the fashion began in the 1920s when western women’s skirts became shorter.” The magazine stops short of providing an alternate explanation, however, so we’ll suggest one: Throughout the early 20th century, spending power increased, and many American women spent their extra money on magazines like Ladies Home Journal and Harper’s Bazaar. Advertisers quickly zeroed in on this captive audience, and beauty product manufacturers encouraged women to think of their body hair as undesirable. Razor manufacturer Schick notes that World War II may have accelerated the trend. “During World War II there was a shortage of silk stockings causing many women to shave their legs and to use leg makeup to give the appearance of stockings,” the company’s website claims. While that makes for an interesting story, we couldn’t find many credible sources to back up Schick’s claims that the nylon shortage popularized women shaving their legs. We did find images of women painting on nylons during the second World War. It’s possible that nylon shortages compelled some women to shave, however, so we’ll give Schick the benefit of the doubt.

In any case, women were dying to be hairless—literally.

For whatever reason, in the early 20th century, body hair was suddenly undesirable, and women had no shortage of options for hair removal. Unfortunately, many of those options were dangerous. As Nadine Ajaka wrote for The Atlantic:

In the 1920s and ’30s, women used pumice stones or sandpaper to depilate, which caused irritation and scabbing. Some tried modified shoemaker’s waxes. Thousands were killed or permanently disabled by Koremlu, a cream made from the rat poison thallium acetate. It was successful in eliminating hair, and also in causing muscular atrophy, blindness, limb damage, and death.

Who can forget the dyed armpit hair trend of 2015? In that tongue-in-cheek movement, women like Destiny Moreno purposefully drew attention to their neon-colored armpits. It seemed to really bother people on social media—and that was the point. “Nobody questions when a guy wearing a tank top does a selfie that shows his armpit hair,” Moreno told The New York Times. “But if I happen to show my armpit hair in a selfie, it’s like, ‘Whoa, feminist witch asking for attention.'” In 2016, a survey showed that about 77 percent of women between the ages of 16 and 24 remove the hair from their underarms. That’s down from 95 percent in 2013. Love it or hate it, female body hair is coming back. Beauty ideals change constantly, and we may see hair removal norms shift over the next decade to a more body-positive place. In any case, we’ve at least come a long way from the days of thallium depilatories—even if we’re not quite living in the hairy utopia of our dreams.