Before you head in the bathroom, avoid a faux pas by following these essential rules. 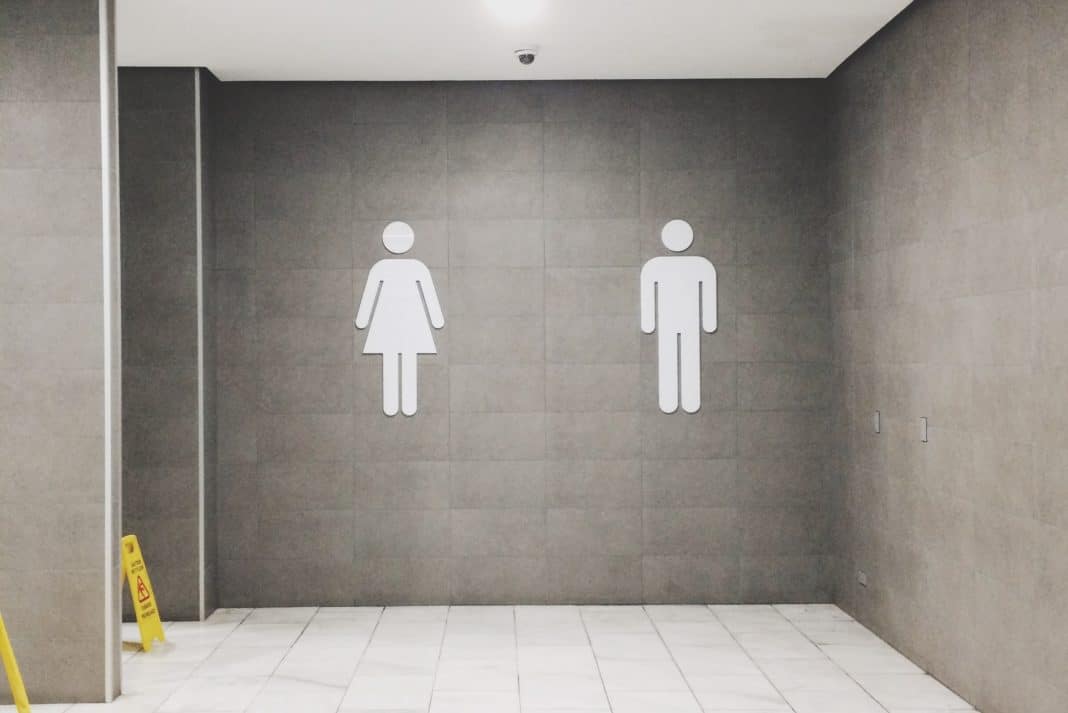 Public restrooms aren’t very complicated. However, in a bathroom, etiquette immediately becomes extremely important. You don’t want to make anyone uncomfortable, particularly when they’re, ahem, taking care of business. There’s no quicker way to make a lifelong enemy. Unfortunately, many people don’t seem to understand the basic rules of using a public bathroom. That can result in some appallingly selfish behavior. Don’t be one of those people. Here are the basic unspoken rules we all agree to when we use public bathrooms; memorize them to avoid an embarrassing faux pas.

Treat bathrooms like monasteries. Don’t disturb the silence unless absolutely necessary. In a bathroom, silence is golden, and no, that wasn’t a pee pun. There’s no reason to talk, as every topic of conversation will be tainted by the environment (and anything you can say in a bathroom can probably wait two minutes, regardless). In 1963, researcher Erving Goffman released the crucial study Behavior in Public Places, which examined our bathroom interactions through an anthropological lens. As Goffman observed, when two people don’t know each other and meet in a bathroom, they react with “civil inattention.” “One gives to another enough visual notice to demonstrate that one appreciates that the other is present,” Goffman wrote, “…while at the next moment withdrawing one’s attention from him so as to express that he does not constitute a target of special curiosity or design.” Even if a fire breaks out, a mild clearing of your throat will probably be enough to warn your potty neighbors of the danger.

The silence rule also applies to cell phones. In fact, cell phones are even more annoying than the people who head to the toilets to gossip, because with a cell phone conversation, you can only hear one side. “What? Yeah, 15 of them…a full orphanage…no, my mother hasn’t been laminated in ages.” We have no idea what you’re talking about, but we’re tired of guessing. We just want it to stop. Oh, and there are practical reasons to avoid this habit, by the way—bathrooms are, unsurprisingly, teeming with bacteria, and a single toilet flush can spread those germs to an exposed handset.

3. Give people plenty of space.

4. If you see someone you recognize, it’s okay to nod, but…

It’s bad form, and it has nothing to do with the germs, assuming you’ve just washed them. Everyone knows where your hands just were. Let them breathe for a few minutes before you start shaking hands like a politician. By the way, make sure you wash your hands thoroughly. Dabbing them with a little liquid soap and running them under a teaspoon of water isn’t enough; the CDC recommends washing for at least 20 seconds. Unfortunately, most people don’t follow this tip. A study from Michigan State University found that only 5 percent of bathroom-goers washed their hands properly after using public bathrooms. Perhaps unsurprisingly, about 96 percent of people said that they washed their hands properly.

5. Keep your eye on the clock.

We realize that you want to catch up on the news, but instead of scrolling through Facebook or reading War and Peace during your bathroom break, focus on the task at hand (uh, metaphorically speaking). One survey showed that men spend an hour and 45 minutes per week using the bathroom, while women spend a mere 85 minutes. Hopefully, most of that time is spent in private restrooms, but based on our experiences at restaurants, we doubt it. Keep in mind that other people might be waiting for their turn, and they probably don’t love the idea of hovering around the door like a restroom attendant. Pretend that you’re in the military: Your mission is to get in and out of the bathroom as quickly as possible. You can do it, soldier.

Let’s say that you’re trying to get into a one-person bathroom, and you don’t know whether it’s occupied. Put your hand on the doorknob and gently turn to one side. Did it budge? If not, well, someone’s using the bathroom, and you can’t go in there. Pretty simple idea. You don’t need to jiggle the door handle back and forth like you’re unfamiliar with the concept of doorknobs. That’s a good way to scare the pants off the person on the commode, and yes, we mean literally. Oh, and wash your hand after touching that door handle, by the way. Door handles are common contamination points for dangerous bacteria, and one study showed that dirty doorknob can infect 40 to 60 percent of an office within 2-4 hours.

7. Here’s when you really, really shouldn’t “do it yourself.”

If you clog a toilet, bad news: That’s your toilet now. Unless you can fix it yourself, you’re morally obligated to tell someone. You don’t necessarily have to take responsibility, though. If you’re embarrassed, it’s better to say, “someone broke the toilet” than to push the problem off onto the next person.

8. Live by the golden rule of public bathroom usage.

Clean up after yourself. Without getting graphic, this rule applies to everything in the bathroom. That means that when you’re finished, you should check the seat and the floor and clean accordingly. It also applies to the sink. Sure, soap is clean, but leaving a big glob of soap under the dispenser is bad form.

9. Don’t put someone else in an awkward position.

Say you check into a stall and notice that you’ve only got a few squares left. Don’t use all of them. That might be difficult; on average, people use about 8.6 sheets of TP per trip, per the Toilet Paper Encyclopedia. Still, if you’re going to use up a roll, make sure that you can replace it. As a last resort, leave a sign pointing out the lack of toilet paper (we’re just assuming that everyone travels with plenty of markers and paper). Otherwise, you’re setting some stranger up for a crummy rest of the day.

Many public bathrooms feature fans, which help to circulate air. We know that sounds obvious, but some people seem painfully unaware of this incredibly important fact. If you do something in a bathroom that makes the air not so fresh, look around for a switch that might turn on a fan. You’ll be doing everyone else a pretty big favor, even if you don’t think you’re leaving behind much of a stench. Enough said.

You might be tempted to push the door your favorite stall, since it’s always open. You might also think that pushing on stall doors is a quick way to check whether they’re occupied. It’s also a great way to give the stall’s occupant a heart attack. Every stall latch has a little bit of give, so pushing on the door produces the terrifying sound of metal banging on metal. Just look for feet and avoid any potential embarrassment.

“Hey, I’m going to go number one, I’ll be back in a few minutes.” People really don’t need to know. There’s nothing that they can do with that information. Really, what are they really supposed to say? “Hey, while you’re in there, check out the graffiti in the second stall. It really changed how I think about the world.” Just excuse yourself and head to the bathroom.

Some people (let’s be real, mostly guys) think that they’re being hygienic by flushing toilets with their feet. This is just about the least hygienic thing you can do. Your shoes aren’t clean. In fact, if you just trounced through a public restroom, they’ve been in contact with some pretty disgusting stuff. So you’re putting all those germs where other people may be putting their hands. If you’re really worried about germs, work the handle with a piece of toilet paper.

14. In an office, the bathroom is an authority-free zone.

Sure, Timmy from the mail room makes 10 percent of your salary, but that’s out there in the real world. In Bathroom Land, everyone is absolutely equal. If you’re waiting for a stall or a urinal, there’s a simple rule: First come, first serve. No exceptions.

There’s absolutely no reason to leave your used chewing gum in the urinal. What are you, some kind of a gum-chewing animal? No truly successful person has this habit. Think about it this way: If that’s where you leave your gum, you’re acknowledging that someone’s eventually going to have to reach in and move your used gum to a trash can. We wouldn’t make anyone touch our used gum in the best of circumstances; this is beyond the pale. Unfortunately, gum chewers aren’t the most responsible citizens; according to documentary filmmaker Andrew Nisker, the U.K. pays about $73 million to clean up chewing gum every year, and modern gums are especially hard to clean. “The very attributes that help [gum] hold the flavor in your mouth make it very difficult to remove when it ends up sticking on the sidewalk,” Nisker told The Atlantic. Of course, there’s an easy way to get around that problem. Every restroom has a trash can—use it.