8 Things Your Nail Salon Doesn’t Want You To Know

Behind every manicure lurk some disturbing secrets. 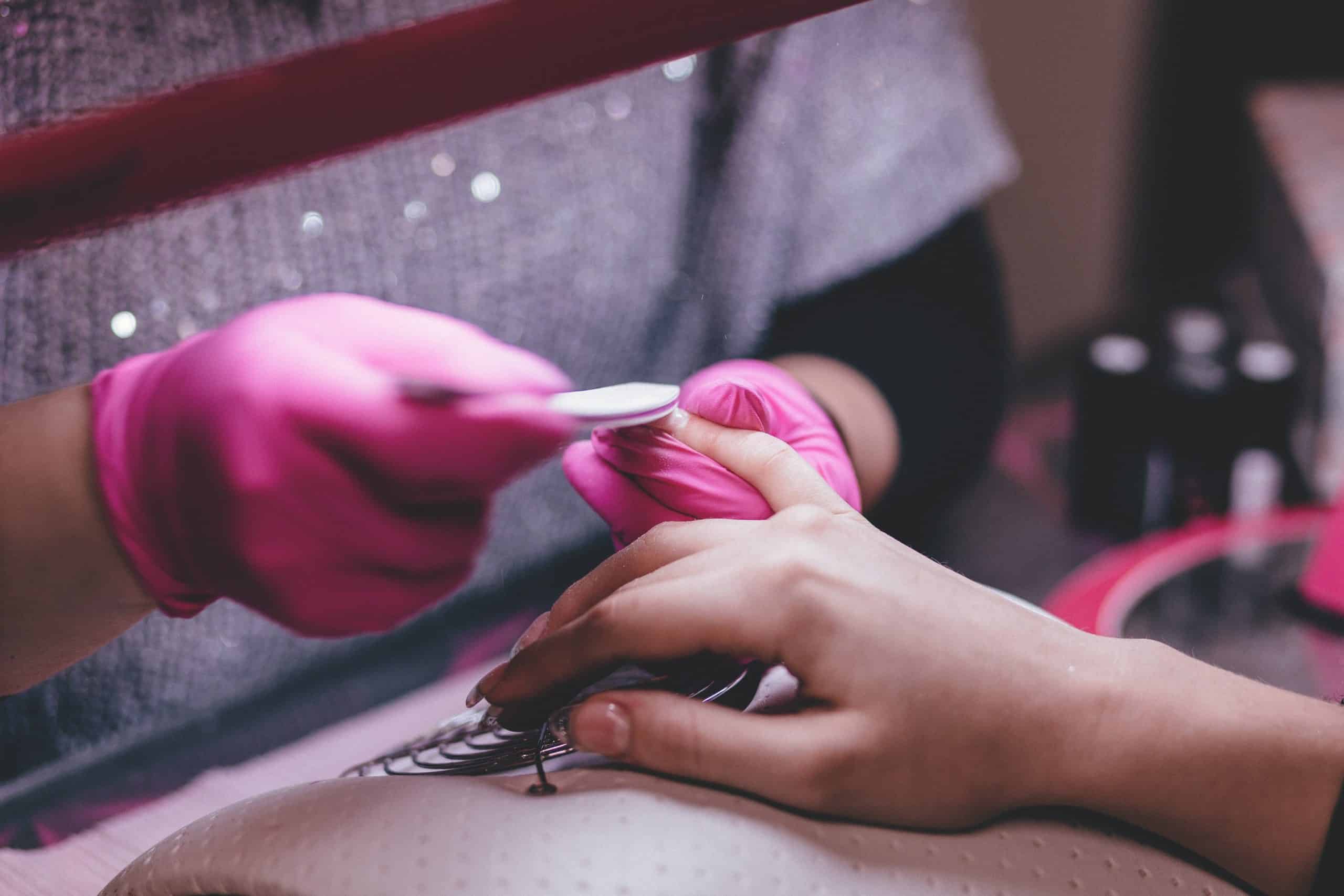 What’s more relaxing than a trip to the nail salon? Well, pretty much everything, when you realize what goes on behind the scenes. To be fair, many manicurists and pedicurists run well-cleaned, wonderful shops—we certainly don’t want to denigrate the profession as a whole. Each year, Americans spend over $7 billion on nail services, and the vast majority walk away happy. However, there are a few things to keep in mind before heading in for your next appointment. For starters…

Let’s start with one of the most obvious (and least dangerous) secrets. Manicurists tend to charge by the service, but they’re not always upfront about what’s included for that single fee. For instance, they might charge separately for a base coat, a nail strengthener, and the polish.   The only way around this trap is to start a conversation. Ask what’s included for the fee you’re paying. When the manicurist goes to work, if you’re not sure what they’re doing, ask them before they begin. You have every right to refuse services or products that you don’t need—and that you’d really rather not pay for. Keep in mind that you can always bring your own favorite nail-care products. When you walk into the salon and hand the manicurist your own favorite base coat and polish, they’ll usually be happy to charge you just for the application. Again, though, make sure that’s a conversation you have before they get started.

2. There’s only one way to ensure sterilization, and your salon probably isn’t using it.

You’ve read the horror stories about people getting terrible infections from contaminated tools at a nail salon. There’s a simple reason why that happens: It’s actually really hard to completely sterilize what is essentially surgical equipment. Surgeons use a machine called an autoclave to make sure they eliminate 100 percent of the fungi, bacteria, and viruses that can live on stainless steel tools. Autoclaves use a combination of pressure, heat, and steam to sterilize equipment. “It’s a specific device that sterilizes equipment with steam, making it sanitary and safe, since no chemicals or irritants are used,” says Debra Lindy, co-founder of Sani Sak, a company that produces sanitized manicure tools. “This is very rarely purchased by nail salons, as it can be cost prohibitive.” The problem with this is that only Iowa and Texas have laws on the books that require nail salons to disinfect equipment with autoclaves. In the rest of the country, manicurists typically use chemicals or UV light boxes to sterilize their tools. Hey, UV light is better than nothing, right? Well, yes, but while those instruments might get rid of most of the infectious organisms that live on nail clippers, they’re not 100 percent effective. Be sure to ask your manicurist how they sterilize their equipment before committing to a procedure. Many salons will also allow customers to bring their own tools; while that might initially feel awkward, it can help to prevent a painful infection. Oh, and as this Answers user points out, it’s also not a bad idea to call your local health department if you’re especially curious about a salon’s practices.

3. Those UV lamps they use to dry your polish might increase the risk of developing skin cancer.

Granted, the risk that you’ll get melanoma from drying your polish under a UV lamp is pretty small, but it exists. Perhaps more importantly, the cell damage can build over time.   “Considering the low UV-A energy exposure in an average manicure visit, multiple visits would be required to reach the threshold for potential DNA damage,” wrote a team of researchers from Georgia Regents University, in a study published in JAMA Dermatology. The researchers also noted that typical exposure wouldn’t be enough to cause DNA damage, but customers who regularly get manicures or pedicures might be at risk. Besides, the researchers found, there aren’t any good standards for manufacturers of UV nail lamps. Chris Adigun, MD, a board-certified dermatologist, told CBS News why this lack of regulation is dangerous.   There is little to no regulation on the manufacturing of these nail lamps,” Adigun said. “As a result, the bulbs, wattage and irradiance of these lamps varies dramatically from one manufacturer to the next, and individuals utilizing these lamps in salons have no way of knowing just how much UV exposure their skin is receiving upon each manicure.”

4. Nail techs are not necessarily trained to properly sterilize their equipment.

Podiatrist Robert Spalding, DPM, has the salon industry firmly within his sights. As author of Death by Pedicure, Spalding is a leading voice about the dangers of contemporary nail salon practices. Spalding maintains that techs simply don’t have the training to verify when tools are safe to use. There is “industry-wide confusion about the definition of the term ‘sterilize,'” Spalding wrote. Nail techs are “neither schooled nor licensed to work in the presence of blood or to maintain a surgically sterile environment,” he wrote. In other words, it’s not exactly their fault that they’re working on customers with infected tools. Rather, it’s the misunderstanding of what constitutes true sterilization. “With years of experience as a nail technician myself, I cannot say I’m confident that everyone is trained to handle situations that may involve blood or sterile environments,” says Lindy. As we’ve mentioned, only an autoclave can completely sterilize equipment. Anything less than this gold standard of sterilization might leave some microorganisms behind. That’s how people get infections. The point is that “some infective microorganisms are easy to kill, some are not,” according to Spalding.

5. There are even cases of customers getting warts from certain nail salons!

Forget fungal infections. How would you like to battle warts on your feet after an unclean pedicure?   The uncomfortable truth is that warts are often caused by a viral infection. If equipment and the environment of a nail salon isn’t kept to the most rigid standards of cleanliness, wart viruses might be present. All that stands between you and a lifetime of bumpy feet is the slip of the tech’s hand—if you get a wart virus in an open wound, you’ll probably end up with the infection. That’s not even the worst of it. Serious viral infections, including HIV and hepatitis C, can also lurk in dirty nail salons. Make sure you attend a high-quality, trusted facility—preferably one with an autoclave. We’re not saying every nail salon is a hive of infections, but use common sense and stick with a salon that you trust.

6. If your pedicurist offers to “shave” your calluses, say “no thanks.”

We understand the temptation. Callouses aren’t the most attractive thing on the human body, and they can even be a bit painful. But remember that those are there to protect your skin—essentially, your body developed them for a reason.   That’s not the only reason to decline an offer to shave your calluses, though. The fact is, the procedure is probably illegal in your state. You see, callus-shaving requires a tool called a credo blade. Technically, credo blades can only be used in “medical procedures,” which most states forbid from being performed at nail salons. Instead of trying to lose the calluses altogether, podiatrists recommend smoothing them over with a little light pumice stone treatment. There’s a chance your nail salon offers this service, but remember that pumice stones are notoriously hard to disinfect. You might want to travel with your own.

7. Have you shaved your legs recently? If so, skip the salon.

If you’ve picked up one thing from this list, we hope it’s that breaking the skin in an unsterile environment is a great way to pick up a nasty infection. That’s true whether you get a cut on the cuticle or a tiny opening on a hair follicle on your ankle. When you shave your legs, you create tiny, invisible openings in your hair follicles. These little holes may be too small for us to see, but for viruses, bacteria, and fungi, they’re like huge, inviting archways. They’re basically an invitation to move in and set up shop. Jackie Sutera, DPM, a podiatrist based in New York, told HuffPost that you should wait at least two days between shaving your legs and heading to the salon for a pedicure. Otherwise, Sutera said, “you can literally end up in a hospital.”

8. It’s up to you to guard your health and safety at a nail salon.

No nail tech wants to get a customer sick. Still, salons are capitalist enterprises, first and foremost. Owners want to make as much money as possible, and that doesn’t create a strong incentive to turn away customers—even if they have a clear fungal infection and shouldn’t be anywhere near a nail salon.   “Because the industry isn’t regulated often enough salon technicians often slack off,” Lindy says. “…It doesn’t take much to transfer a contagious infection or spread bacteria. One negligent technician can transfer [microorganisms] to all the tools in the salon, especially if they’re all using the same disinfectant and the bacteria is resistant” The danger, Spalding wrote, is “the transmission of infection from one client to another.” In other words, be on the lookout—and, for heaven’s sake, if you have a viral, bacterial, or fungal infection yourself, don’t go to the nail salon. Beauty can wait. After all, what is beauty without health?