Is Grilling Bad For Your Health? Here’s What A Registered Dietitian And Oncology Specialist Wants You To Know

Smoke and high temperatures can cause concerns, but there are some ways to make grilling healthy this summer. 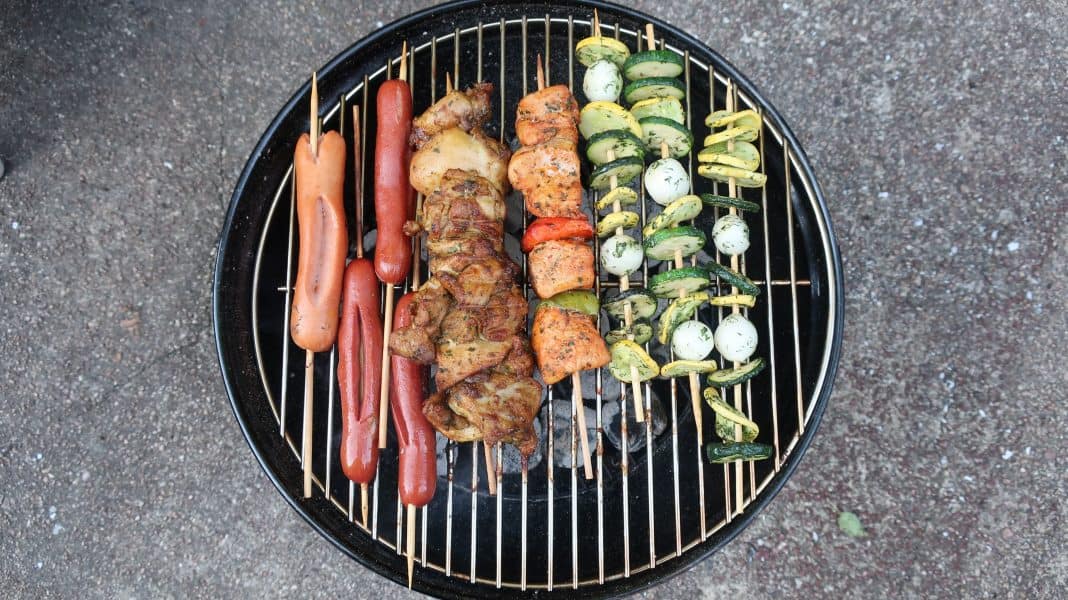 Nothing marks the start of summer quite like the scent of barbecue wafting through your neighborhood. That savory, smoky aroma of grilled meats and vegetables is enough to make your mouth water and hanging out around a backyard grill is pure summer bliss. But if you stop and think about barbecuing—the smoke, the high temperatures, the gas or charcoal—you might start to wonder Is grilling bad for your health? The health effects of grilled food are complicated. Obviously, a diet rich in cheeseburgers probably isn’t doing you many favors. But grilling (as a cooking method) comes with an array of potential health concerns you might want to be aware of before your next cookout. Here’s what you need to know about this beloved summer activity, as well as some tips on how to make grilling just a little bit healthier (without compromising flavor!).

First things first, we should address the question on so many people’s minds: Does grilling cause cancer?

There’s no other flavor quite like grilled meats. The act of tossing a hamburger or sausage on the grill and letting the open flame work its magic is what gives grilled food that unmistakable smoky–savory taste—but the chemical reaction that occurs during the process actually results in some gnarly toxins. “My clients always ask me if grilling is bad for your health,” says Chelsey Schneider, a registered dietitian and certified specialist in oncology in New York City. “My answer is that it really depends on how you’re grilling, but we know that cooking at a high temperature causes harmful chemical compounds to form.”

One study found that women who ate a lot of grilled, barbecued, and smoked meats over their lives had a higher likelihood of developing breast cancer.

When muscle meat, like a juicy steak or pork chop, gets fired on the grill, chemicals called heterocyclic amines (HCAs) and polycyclic aromatic hydrocarbons (PAHs) form in the food. HCAs form when amino acids and other substances in meat react with heat. PAHs, on the other hand, are found in the smoke from fat dripping into flames, which then adheres to the meat. Both of these types of chemicals can actually damage your DNA according to the National Cancer Institute. Yikes! Worse yet, consuming the harmful chemicals found in grilled meat might actually increase your cancer risk. Researchers found that when rodents were fed a diet high in HCAs, they developed cancer in their colons, breasts, prostates, and other organs. Monkeys also developed cancer cells in their livers after consuming the chemicals. According to the National Cancer Institute, PAHs caused similar health effects in studies involving rodents, as well, including leukemia and gastrointestinal tumors. While the levels of PAHs and HCAs the test animals were exposed to were thousands of times higher than what a person would consume on a typical diet, other research shows that it still might be worth limiting our exposure. One study found that women who ate a lot of grilled, barbecued, and smoked meats over their lives had a higher likelihood of developing breast cancer. “At the end of the day, there’s no study that has determined a safe level of these chemicals, or how much grilled meat is okay to eat,” says Schneider.

How you grill matters.

Grill masters’ favorite debate—charcoal vs. gas—will never have a clear winner from a culinary perspective. But when you ask health experts, the answer is clear: Gas grilling wither either propane or natural gas is healthier than charcoal for your body and the environment. “It’s better to grill on a gas grill because it’s easier to control the temperature,” says Schneider. “Anything less than 300 degrees would be on the safer end.”

When fat drops into the fire, harmful chemicals form. Choosing leaner cuts of meat like chicken breast or fish will help cut down on that chemical reaction.
The smoke factor also comes into play when choosing between charcoal and propane grills. Charcoal tends to cause a smokier grilling experience than gas, potentially increasing the likelihood of the formation of harmful PAHs. Mother Earth also prefers gas grills over charcoal. Cooking over charcoal releases pollutants (called volatile organic compounds) and dangerous particulates that lower air quality and pose cancer concerns and other health risks. Charcoal grills also emit almost double the carbon dioxide levels of gas grills. Suffice to say, when it comes to your health and the environment, gas trumps charcoal grills every time.

Healthy Grilling Tips to Get You Through Summer

Sure, there are health risks to grilling. But since that won’t keep most of us away from the open flame, we asked Schneider to share some dietitian-approved healthy grilling tips. Here’s what she recommends:

When fat drops into the fire, harmful chemicals form. Choosing leaner cuts of meat like chicken breast or fish will help cut down on that chemical reaction. “You can also prep the meat for the grill by cutting away some of the fat, as that will reduce the amount of char and shorten grill time,” she says.

“PAHs and HCAs aren’t found in vegetables. It’s really the amino acids and juices from protein that create carcinogenic compounds,” says Schneider. A vegetarian cookout might just be the healthiest way to grill!

“Using a low to medium heat setting would be better for your health,” she says. Pay attention to the thermometer on your grill, and try to keep it below 300 degrees.

Harness the magic of marinades.

Scientists have found that grilled beef steaks marinated in spices, oil, water, and vinegar contained significantly fewer HCAs than non-marinated meats. “There’s also some research that found that rosemary could actually block the formation of HCAs and PAHs,” says Schneider. “Why not marinate your meat with rosemary and other herbs? That can make it taste good, too.”

Pre-cook your meat on the stove or in the oven.

“Just use the grill to sear it,” says Schneider. That’ll give you that savory grilled flavor in a safer way.

“Continuously turning your meat on the grill makes it less likely to get charred, and the charred part tends to have more of the carcinogenic molecules. I recommend cutting that charred part away, as well,” she says.

Scrub down your grill frequently.

“Leftover bits of food on the grill can contribute to charring. Clean it every time after you grill. That will help limit the soot and grease that builds up,” says Schneider.

Bottom Line: Is grilling bad for your health?

It depends. While there are concerns that foods cooked over high temperatures (and with smoke) increase your risk of cancer, grilling a few times over the summer probably won’t do much harm. Also, given that it generally doesn’t involve much, if any, oil, grilling might offer some nutritional advantages over other cooking methods, says Schneider.

“There’s also some research that found that rosemary could actually block the formation of HCAs and PAHs. Why not marinate your meat with rosemary and other herbs?”

—Chelsey Schneider, RD
“If you’re grilling and doing it right, that’s definitely healthier than frying,” she says. “When you’re frying, the food absorbs a lot of oil, and fried foods tend to be coated in flour, so they have a high fat and carb content.” Being conscious of what you throw on the grill and how you’re grilling it can go a long way toward healthier cookouts. So go ahead, RSVP yes to the next neighborhood barbecue. Treat yourself to a burger or sausage once in awhile, load up on veggies (nothing beats grilled summer corn), and enjoy. As with most things in life, moderation is key to staying balanced and healthy.