We can never look at photos of food the same way again. 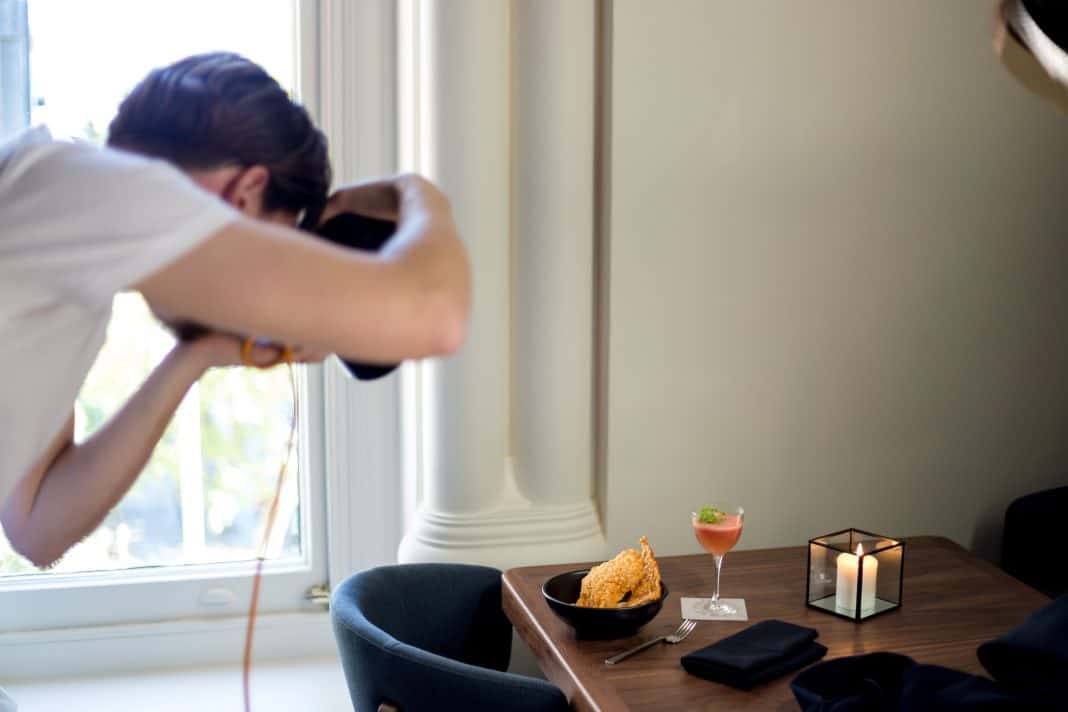 You know those gorgeous, mouth-watering photos that restaurants use to lure you in? Bad news: Your food probably won’t look much like that when it arrives on your table. That’s because professional food photographers know dozens of tricks to make food look better—even if they have to add a few, ahem, special ingredients to get the perfect shot. We exchanged emails with Albert Hakim, a photographer working at Laserwave Graphic Design Studio, to analyze some of the food photography tricks we’ve seen floating around the internet. Hakim says that he prefers to work with real foods wherever possible. In general, it’s a safer practice—the Federal Trade Commission Act prohibits “unfair or deceptive acts or practices in or affecting commerce,” so food photographers can’t go too far when staging their shots.

You can cheat in Photoshop, but it’s never the same.

If they’re taking pictures of a restaurant’s salads, for instance, they’re required to use the real salads that you’d get at the restaurant. However, that doesn’t stop them from getting creative to get the perfect photos. For example…

Ever notice how soup bowls seem to be brimming with vegetables and noodles? In real life, those veggies would quickly sink to the bottom of the bowl. In order for food stylists to make it appear that toppings are “floating” on the top of a soup, they’ll often use another small dish turned upside down to create a platform. One soup manufacturer even used marbles, but that led to a costly lawsuit (since the marbles made the soup appear chunkier than it really was).

Sure, the soda in that soft drink ad might seem tantalizing, but the ice might not be actual ice. The reason: Real ice would melt much too quickly under those bright studio lights for someone keen on getting just the right angle. Instead, glossy, perfectly formed, and melt-free plastic cubes like these tend to take their place and continue to convince overheated patrons that all they need to cool down is a chilled glass, topped off with, well, ice. However, seasoned photographers can also work with the real stuff. “They do make fake ice cubes, but if you can work fast, real ice works just fine,” Hakim says. “In my world, generally we try to shoot the actual food, on location, fresh out of the oven or freezer. The actual shot then has to happen within 5 minutes.”

It turns out it’s not just the ice in the drinks that’s misleading; the drinks themselves might have undergone some trickery as well. You know those ultra-charming splashes that never look like the mess they’re pretty sure to turn into, but some hypnotizing water show? Well, there’s a reason they say if it’s too good to be true, it usually is. For some ads, those big splashes are actually constructed with plastic. That would explain why it looks so perfect. Not all photographers want to fake it, though. According to Hakim, it is possible to capture a real splash, but photographers need to use natural lighting and very fast cameras. “I would use reflected sunlight, so I can shoot at a much faster shutter speed to capture the action,” Hakim says, “much like [with] sports photography.”

4. Those grill marks might look a little too perfect.

Good grill marks are essential for selling a steak. Of course, they’re not always real. Photographers sometimes draw grill marks with eyeliner, but it’s often easier to add the marks with a soldering iron or a charcoal starter. Why not just cook the meat on a real grill? That seems like a much more reliable way to get good grill marks. Well, there’s a problem with that…

5. If you see a cut of meat, it’s probably not cooked.

Technically, the meat from a photo shoot is edible, but you’d probably want to avoid it—unless you’re a fan of raw foods. When meat is cooked, it shrinks slightly, and it can take on unpleasant textures in high-definition photos. Completely cooking the meat is, therefore, out of the question. Instead, the food stylists will craft the outside of the meat with a blowtorch. “Just the top needs to be cooked, or slightly burnt or singed,” Hakim says. “Coarse spices help with realistic texture.” This doesn’t necessarily apply to burgers, by the way. We’ll get to that in a minute.

Texture plays a huge role in the culinary arts, so when a restaurant or food brand wants to sell a product, they need to represent textures perfectly—cereal manufacturers, for instance, need the milk surrounding their product to look creamy and delicious.

Dynamic lighting and reflecting is very important to capture gloss, texture, and depth.

There’s just one problem: Milk doesn’t really look thick and creamy in real life. To get around this, some food photographers use glue, according to a food stylist quoted by The Guardian. To make the cereal pop out of the milk, photographers might fill the bottom of the bowl with shortening, then put a thin layer of real milk on top. Hakim says that, wherever possible, he tries to work with the real thing. “[Elmer’s glue] seems unnecessary,” he says, “[but] dynamic lighting and reflecting is very important to capture gloss, texture, and depth.” To give texture to savory foods, Hakim uses coarse spices and oil sprays. He’s also ready to improvise if a food doesn’t “pop” in the right way. “A good photographer must be able to think fast and act fast to make adjustments for a great photo,” Hakim says.

7. Fast food burgers are on a whole different level.

There’s absolutely nothing better—or more misleading—than a hamburger ad from your favorite fast-food chain. Of course, the food in the ad is completely different from the burger you’d get at your local restaurant, right?

Actually, no. By law, McDonald’s has to use the same stuff it sells. However, the chain can pick out the best-looking burgers, perfect buns, and top-notch condiments from the ingredients their locations normally use. Staging the burger can take hours, and since photographers only take pictures from one angle, stylists work exclusively on that side of the sandwich. In other words, if you see onions and tomatoes spilling out of a burger, the other side probably looks completely bare. For smaller restaurants and food brands that don’t have the multi-million dollar McDonald’s budget, there’s no real secret to getting great photos of a big, delicious burger. “Start with a big and delicious burger,” Hakim suggests. “Spray some vegetable oil on it to look more juicy. Good grill marks help…[but] be ready to shoot the subject very quickly. If you want to spend two days shooting a hamburger, everything [would] need to be fake.”

8. The pancakes are real, but the syrup…

If you think those delicious pancake photographs with the syrup dripping off the edges look too good to be true, you’re right! To learn two simple tricks to up your pancake photography game, watch the video below.

9. Those fresh berries aren’t so fresh, after all.

The easiest way to get a great photo of a bowl of fresh berries is, of course, to pick some. But that’s not always an option, particularly if the berries aren’t in season. To bring out the color of the fruit, food stylists will rinse each berries in cold water with lemon juice. They might also add coloring, but they’ve got to be careful if the dish is appearing on a menu; while stylists can add lipstick or fingernail polish to get more of a pop, that’s considered false advertising if the berries are the primary focus of an ad.

10. That steam might not actually be steam. And it probably isn’t coming from the food.

Steam doesn’t stick around for too long, so during an extended photo session, photographers have to get creative. They’ll sometimes use sticks of incense to capture a steady stream of steam. Hakim says that, in a pinch, a drizzle of boiling water can work just as well. “You can also cheat in Photoshop,” he says, “but it’s never the same.” According to Hakim, the best staging tricks are no match for a skilled photographer with plenty of experience. “Use colorful composition where applicable,” he suggests. “…Make sure hot things are hot, cold things are cold, and be ready to shoot the subject very quickly.”