We all make mistakes. 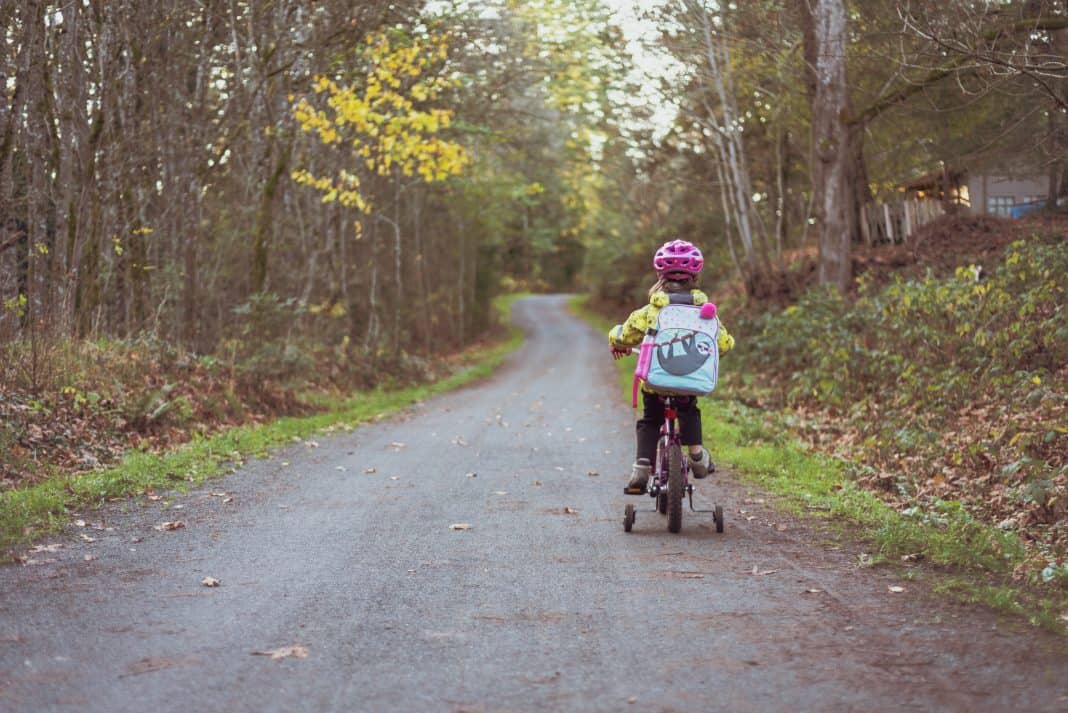 Every parent wants to do everything perfectly. Unfortunately, that’s impossible—we all make mistakes. Raising children is a real balancing act, as holistic psychologist Ellie Cobb, PhD, will tell you. “The key is balance,” she tells HealthyWay. “Providing children with [a] full free range of choice can send the signal that they are not being cared for and can create anxiety for them. Providing no choices can hinder a child’s individual development.” The trick is to find the right combination of freedom and restriction for your family, she says. “Providing some choice and also some structure creates the most effective space for children to grow, develop, and learn,” Cobb says. Note that she does not say it’s easy. As we said, every parent makes mistakes, and some of those mistakes are common enough that they deserve some attention. We reached out to experts in a variety of fields and asked them a simple question: What could parents do differently? For starters…

1. Your kid’s backpack is dangerously overloaded.

Not only that, it might not be the right type of backpack, according to Scott Bautch, chiropractor and president of the American Chiropractic Association’s Council on Occupational Health. Bautch has consulted on backpack design projects, and while he believes that technology is helping to push parents in the right direction, they frequently force their kids to bear a heavy load. “For younger children, backpacks are designed to carry about 10 percent of their weight, up to 15 percent for kids over 12 years old,” Bautch says. “If the backpacks are carrying more weight, they would be designed differently to shift the weight [to kids’] hips.” But Bautch says that the average fourth-grader carries an incredible 33 pounds—about a third of their body weight—which can lead to injuries and musculoskeletal disorders. To put that in perspective, it’s the equivalent of a 150-pound adult carrying around a 50-pound weight every day, and that’s a real issue. Per the U.S. Consumer Product Safety Commission, as many as 7,300 kids per year end up in emergency rooms due to backpack-related injuries, reports CNN. To avoid injuries, parents should carefully monitor the weight of backpacks on a day-to-day basis. Just as importantly, parents should choose backpacks that are sized and designed appropriately with broad, padded straps and multiple compartments, which help kids intuitively load their backpacks correctly so that heavier loads are towards the bottom. Finally, kids should learn to lift their backpacks onto a chair or table before lifting them onto their backs; this prevents a harsh twisting action, which can cause an injury. “We buy backpacks because they have Scooby Doo or Big Bird, but we really need to think, ‘how are these affecting my child?'” Bautch says. The American Chiropractic Association offers more tips for avoiding backpack-related injuries here.

2. Attempting to ease your child’s fears might inadvertently reinforce them.

Let’s say that your child is afraid of strangers; as a parent, your immediate inclination might be to guide them through interactions with teachers, relatives, and children in a safe, controlled environment. That’s a good intention, but it can be somewhat misguided. “Things that they are doing to ease the child’s anxiety, fears, and phobias are often the very things that make those problems worse,” clinical psychologist Anna Prudovski, MA, C.Psych, tells HealthyWay. “Parents often try to protect the child, answering questions for a shy child, allowing a child who is afraid of the dark to sleep in parents’ bed [or] keeping the lights on at night. But this is exactly what [keeps] the fears and anxiety going.”

“Avoidance reinforces the child’s fear by demonstrating that the stressor is something that cannot be talked about.”

—Ari E. Fox
Prudovski recommends a different approach. “As difficult as it is, gradually and consistently exposing the child to the things they fear is the only way to get rid of the fears (and to avoid therapy in the future).” Psychotherapist and licensed clinical social worker Ari E. Fox of Cope With School NYC agrees. “The best way to overcome anxiety, fearful situations, [or] phobias is by recognizing the challenge, making a plan, and gently exposing the child to whatever makes her anxious in the most benign form possible,” Fox explains. “For example, if a child is afraid of travelling by subway, rather than taking only taxis or the bus, they can read about the subway, then visit a station, then take the train for a stop or two and continue to take longer trips gradually as the fear subsides,” Fox says. “Avoidance reinforces the child’s fear by demonstrating that the stressor is something that cannot be talked about.”

3. The “never wake a sleeping baby” adage can cause sleep issues.

“This results in fragmented sleep and can prompt nighttime awakenings,” says Dennis Rosen, MD, a pediatric pulmonologist and sleep specialist working at Boston’s Children Hospital. Rosen is assistant professor of pediatrics at Harvard Medical School, and he authored the school’s guide for children’s sleep strategies. Rosen says that while parents shouldn’t disturb sleeping infants during their first few months, babies should start getting most of their sleep at night by the time they’re around 3-6 months old. “Maintaining and enforcing a regular and balanced sleep schedule winds up making everybody’s lives easier, even if it means keeping that toddler from taking a three hour nap in the middle of the day,” Rosen wrote for Psychology Today.

4. Introducing kids to computers without setting firm rules can cause issues.

These days, kids need to know how to use computers in order to succeed, but too much screen time is definitely problematic. As tempting as it might be, parents shouldn’t let their computers, tablets, and smartphones play the role of babysitter. “By introducing screen time early on, they are potentially creating numerous problems and conflicts that they could have avoided otherwise,” Prudovski says. Those problems include sleep issues, likely prompted by blue-spectrum light, which may suppress the production of the hormone melatonin. Per the Harvard School of Health, that might raise a person’s risk of obesity, diabetes, and other serious disorders. There’s even some limited evidence that bluelight could contribute to vision problems.

“Parents can set expectations and boundaries to make sure their children’s media experience is a positive one. The key is mindful use of media within a family.”

—Megan Moreno, MD
“We’ve seen a substantial increase in myopia [also known as nearsightedness] over the last 20 years, and that’s coincided with an increase in computer usage,” says ophthalmologist Gary Heiting, OD. Of course, we’re just scratching the surface here; a 2001 review found that children who use computers early in life may have trouble distinguishing between the real world and the electronic world, and psychologist Aric Sigman, PhD, has repeatedly warned that excessive screen time is “linked with significant measurable biological changes in their bodies and brains that may have significant medical consequences.” The American Academy of Pediatrics (AAP) recommends limiting screen time to one hour per day for children 2 to 5 years of age. For older kids, parents need to stay engaged to determine how much screen time is too much. “Parents play an important role in helping children and teens navigate media, which can have both positive and negative effects,” said Megan Moreno, MD, author of the study, in a statement relayed on the AAP’s website. “Parents can set expectations and boundaries to make sure their children’s media experience is a positive one. The key is mindful use of media within a family.”

5. There is a right and a wrong way to praise your child.

As parents, our instinct is to heap praise on our kids so that they grow up with a healthy self-image. There’s just one problem with that impulse: Certain types of praise can actually damage self-esteem. That’s according to a 2014 study published in the Journal of Experimental Psychology. When you praise children for their personal qualities, the researchers found, they later felt greater shame following an experience of failure. Over time, that feeling of shame—the sense that they are themselves the failures—can add up to the poor self-esteem that every parent wants to save their children from. That doesn’t mean you should stop praising your kids, of course. Quite the opposite. It’s just important to choose the right kind of praise. Those same researchers that demonstrated the negative effects of personal praise found that process praise, or compliments on specific behavior, rather than the self, does not lead to greater shame after failure. In fact, it’s a pretty good bet that process praise is the way to build your kid’s self-confidence right from the start. So next time your kid brings home straight A’s, don’t say, “You’re the smartest kid in the world!” Instead, say, “I love how you studied so hard all year long to earn those grades!” Of course, the style of your praise isn’t the only factor at play, here. There’s also the question of quantity. A more recent study published in the journal Social Psychological and Personality Science suggests that parents should strive for a happy medium—neither overpraising nor withholding praise from their children. These researchers asked parents and children if parental praise was commensurate with actual academic successes. When parents said that they over- or under-praised their kids for their schoolwork, those kids were more likely to do poorly in school. They were also more likely to have depression. The takeaway, at least for now, is that parents who confer praise when and where children do something praise-worthy have the right idea. If hearing someone complain about how “everyone gets a trophy these days” makes your skin crawl, you’re not alone. But the science seems to suggest that they might have a point.