8 Smart Things To Do In The Shower—Besides Washing Yourself

If you don't do anything in the shower other than wash yourself, you're missing out. Here's why. 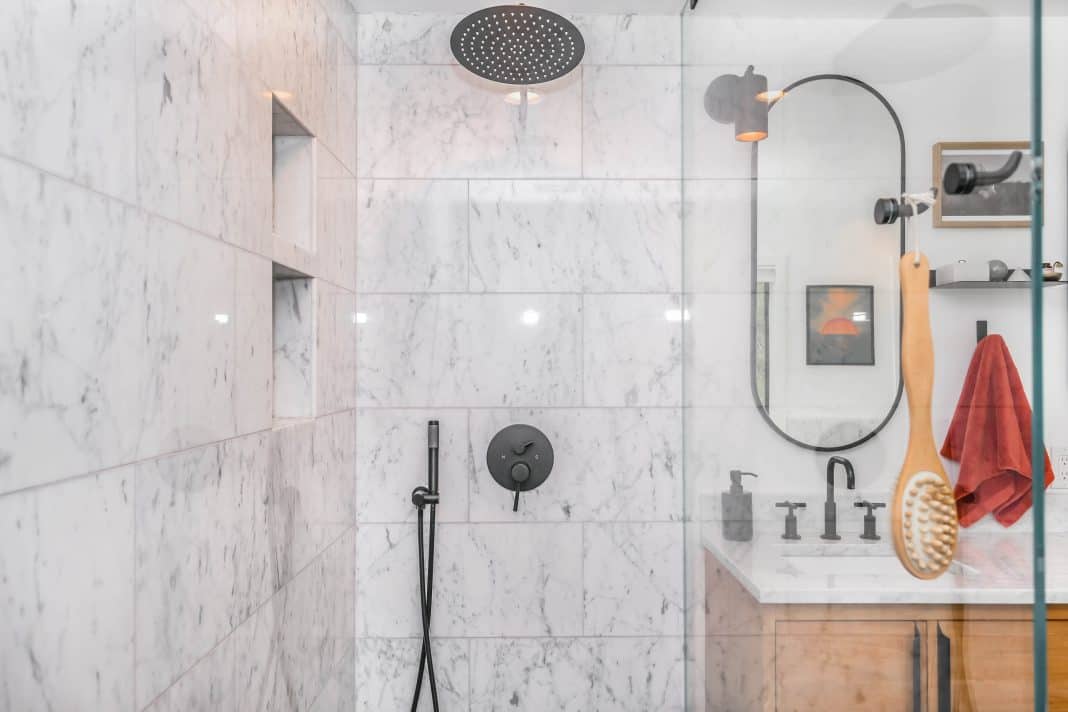 The average person spends 8.2 minutes in the shower. That’s plenty of time to get clean, but it’s also plenty of time to get a head start on your day. By using your shower time optimally, you can improve your brain, become healthier, and live a more efficient existence. Don’t believe us? The next time you shower, consider adding a few of these activities to your routine.

1. Think of something creative.

The shower is a pretty relaxing place, and when your brain relaxes, you enjoy a nice dopamine rush. That’s extraordinarily helpful if you’re looking for creative inspiration, according to neuroscientist Alice Flaherty. People vary in terms of their level of creative drive according to the activity of the dopamine pathways of the limbic system,” she said, and if you don’t understand that, don’t worry. Basically, warm showers can induce a dopamine rush, which temporarily improves creativity and allows your mind to work its magic.

Obviously you’ll need to have some sort of audio playing in order to learn anything in the shower, but you might actually learn more effectively. One study showed that white noise slightly improved memory by enhancing connectivity between parts of the brain that modulate dopamine and attention. Your shower faucet doesn’t create pure white noise, but it’s similar enough that there could be a benefit. If that’s not good enough for you, another study showed that human brain cells are often more receptive in the earlier hours of the day. You’re also less likely to be overstressed or distracted, since you just woke up. By playing an educational podcast or running through some audio cue cards, you can pick up and retain quite a bit of knowledge. On behalf of your librarian, however, we’ll ask that you refrain from bringing any books in the shower with you.

For the same reasons that you can study effectively during your morning shower, you can plan pretty effectively. You might as well make a few goals while your critical thinking skills are in full swing, and the noise from the shower should help to block out other distractions in your house. Try making a list of the day’s most important tasks (or the next day’s tasks, if you shower at night). You probably won’t have any writing tools handy while you’re in the shower, although they do exist (do a search for “shower markers” for plenty of options). But that’s a good excuse to work on your memorization skills. The American Psychological Association notes that people can boost their working memory by practicing, so even if you’re not able to retain any of your carefully made plans, you’ll at least be improving your brain functionality.

Maybe you’re not into thinking things through in the shower; maybe you’d rather let your mind rest for a few minutes. That’s perfectly fine. By using your shower time to meditate, you might be able to change the way your brain functions for the rest of the day. Meditation is an effective treatment for depression and anxiety, according to one study review, so it’s an ideal practice to incorporate in your daily routine. It can also stop your mind from wandering during the day and may even change the structure of your brain. So how long will it take you to realize the benefits of meditation? Not long, according to one study. Participants enjoyed improved focus, improved memory, and lower stress levels after only a few weeks of practice. If you decide to start meditating in the shower, we’d recommend setting a timer; otherwise, you might end up being the first enlightened guru with soggy fingertips.

Singing can fight depression and stress, probably by improving dopamine levels, and the effect might be accented by singing in the shower, since you’re already benefiting from a dopamine release if you’re feeling relaxed. Some research even suggests that singing can extend your life by strengthening your lungs and heart, although that research was completed by a vocal coach, so we’d take it with a grain of salt. But according to another study, singing “can produce satisfying and therapeutic sensations, even when the sound produced by the vocal instrument is of mediocre quality.” If you’re one of those “mediocre quality” singers, we’ve got more good news for you: Science has basically proven that you sound your best in the shower thanks to the acoustic setup of most showers and baths. The linoleum acts as a resonant cavity, amplifying certain features of your voice and making you sound much, much more talented than you really are.

Sure, it’s not as glamorous as some of the other items on this list, but eventually you have to clean the shower. Why not take care of it while you’re already cleaning yourself? Obviously you don’t need to clean the shower every time you climb in, but this is a good habit to get in if you have trouble finding the time to tidy up your bathroom. We’d recommend keeping a clean brush in the shower specifically for this purpose. The brush can break up most soap scum and other grime without an added cleaning liquid, but if you feel like using a liquid, vinegar is a great option. Just be sure to spray the shower down with a vinegar–water mixture a few minutes before you climb in. Vinegar is a weak acid, so it needs time to work for maximum efficacy. Plus, if you try spraying the vinegar when you’re already in the shower, you might end up smelling like a salad.

7. Turn down the temperature.

If you can stand freezing water, you can reap some surprising health benefits. One group of researchers found that cold showers dramatically improve the metabolic rate of certain types of fat (probably because your body thinks you’re trapped somewhere in the Arctic Circle). There’s also moderate evidence that cold showers can decrease levels of uric acid, which is associated with gout. This might indicate that you can improve your immune system by drenching yourself in cold water. You might even reduce recovery times after a workout, and you’ll certainly be improving your willpower. If you’re willing to throw that knob over to the “cold” side, you’ll be able to do just about anything. Although we’d love to recommend cold showers wholesale, we should make an important disclaimer here: If you have any medical condition whatsoever, talk to your doctor first. The shock of an icy shower can throw your system for a loop, and only a trained physician can tell you whether it’s a good idea.

8. Get out as soon as possible.

Let’s say that nothing else on this list caught your interest. That’s fine; shorter showers could save the planet. According to the University of Richmond, the average American uses an incredible 100 gallons of water per day. Much of that is wasted in the shower. Reducing your shower time by 2 minutes can save 6 gallons of water a day, which will add up to over 2,000 gallons a year, the University’s website notes. If you spend an abnormally long time in the shower, cutting down to the absolute minimum could save even more clean water. So what’s the best way to help the environment while staying clean? Consider a Navy shower. Promoted by the United States Navy (duh), it’s quite simple: You turn on the water, wet yourself, then turn the water off. You then use soap to lather up before turning the water on once more to rinse off. While that saps your shower time, it can reduce water usage by 95 percent.