When you're unable to regulate your emotions, every relationship eventually explodes. Here's how to recognize the signs of BPD. 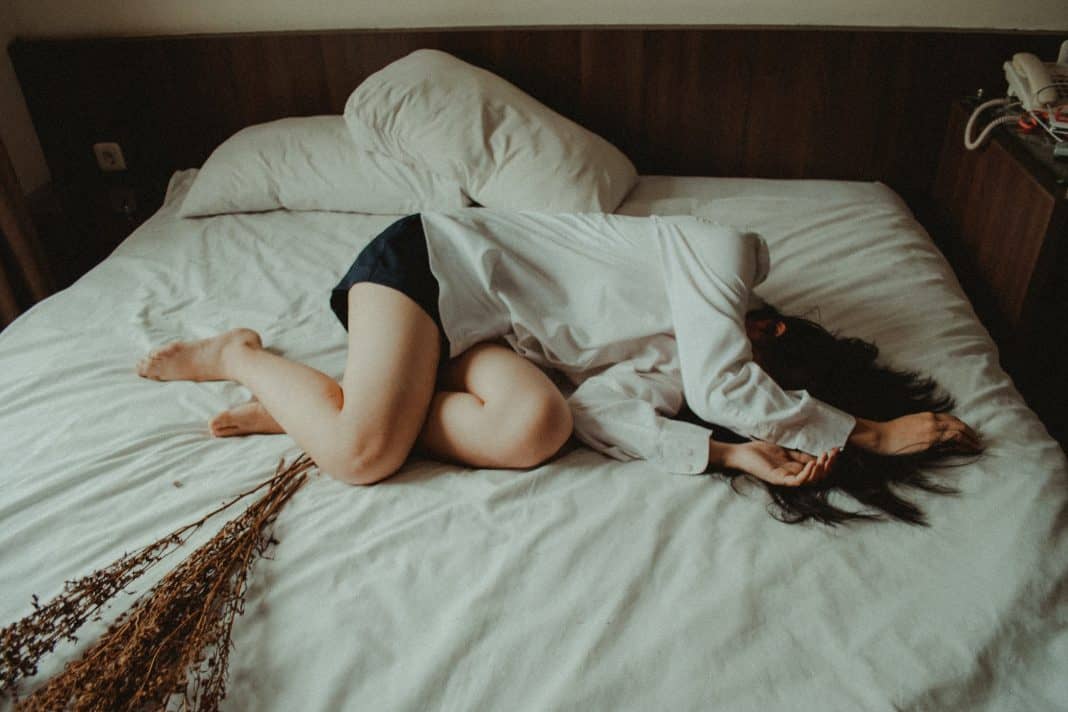 “I felt like he was going to leave me. I felt like everyone was going to leave me.” Ashley, 32, was in a new relationship with a man she really liked. She had no reason to believe anything was wrong—and no reason to do what she did. “For days, I tried not to let him out of my sight,” she says. “I tried to hold on, but I kept feeling more desperate. It didn’t matter. I was sure that he was going to leave, so I told him I was going to [hurt myself]. He told me to get help, and for once, I listened. I don’t know why. Maybe I thought that was the only way to make him stay.” Ashley had many of the signs of borderline personality disorder. She depended heavily on others for her identity, which led to dramatic moments where her relationships broke apart in front of her. She couldn’t regulate her emotions, and she couldn’t hold onto a stable sense of self. According to the National Institute of Mental Health, about 1.4 percent of U.S. adults can be diagnosed with borderline personality disorder. That’s a shockingly high number—and it’s even more distressing considering the large amount of misinformation surrounding the condition. Borderline personality disorder (also known as BPD or emotionally unstable personality disorder) is a serious, long-term condition characterized by mood swings and dangerous behavior. Like many personality disorders, it’s extraordinarily complex, with environmental, genetic, and social factors contributing to the development and progression of the disease. Women are significantly more likely to suffer from BPD than men. The good news is that the condition responds well to psychiatric treatment. The bad news: Because mood swings can accompany a variety of physiological diseases, people often misinterpret the signs of BPD. After all, it’s a hard distinction to make, even for a trained psychologist; is a person experiencing one of the dramatic breaks commonly associated with BPD, or are they simply going through a tough time? Will their behavior eventually change—or do they need professional intervention? To be clear, nobody should try to diagnose a mental illness on their own (or any other illness, for that matter), but recognizing the symptoms is the first step toward getting treatment. We looked into some of the commonly missed signs of this disease with the help of psychiatrist Alex Dimitriu, MD.

1. People with BPD have extreme instability in their personal relationships.

“Signs of BPD include unstable relationships, generally with significant drama,” Dimitriu tells HealthyWay. Because people with BPD have difficulty regulating emotions, they have trouble maintaining a healthy baseline. That means their personal relationships become unstable—and, in a sense, they seek out and create that instability. “Unstable attachments can often manifest in splitting, or having very intense feelings that can quickly change from love to hate,” Dimitriu says. “Rage inevitably occurs, and people with borderline personality disorder can be very harsh on both themselves as well as those around them.” For people who don’t have the illness, those changes can be extreme and frustrating. People with BPD might be emotionally cruel, or they might completely disengage from relationships.

2. That instability also carries over to their sense of self.

“I had hobbies [before I received treatment], but they changed all the time,” Ashley says. “If I had a new boyfriend or best friend—they were always ‘best’ friends—I was obsessed with whatever they were obsessed with. But my moods changed almost constantly, even throughout the day, which made it impossible to focus on anything other than those relationships.” Those symptoms are fairly common among people with BPD, who might even go so far as changing their beliefs, principles, and (gasp!) political affiliations in an effort to fit in. “[Another symptom] is an unstable sense of self, resulting in ‘melting into’ various groups or fads, and outside observers may at times feel the borderline [person] is like a ‘chameleon,’” Dimitriu says. “Because of an unstable sense of self, combined with the intensity or rage episodes, it is not uncommon for people with BPD to do self-damaging things.” To put that another way, a person with borderline personality disorder might move from group to group in an effort to fit in and feel comfortable. They’re looking for an environment that will provide some sort of stability and sense of identity. Ironically, moving from group to group will likely cause instability with their interpersonal relationships.

Generally speaking, BPD behaviors aren’t exactly subtle. However, they can be difficult to identify as symptoms of a mental illness. To friends and family members, a person with BPD might simply seem like they’re being unreasonable in the moment. As with other mental illnesses, it’s difficult to separate the disorder from the person. “[BPD behaviors] can range from impulsively sending an email that could result in getting fired, to fighting or being dramatic in relationships, to threats of suicide or self-harm in the form of cutting or medication abuse,” Dimitriu says. Of course, a person can present some of those symptoms without having a mental illness, and psychologists don’t make a diagnosis from a single incident. One of the defining features of BPD is that it persists over long periods of time and through multiple relationships. “Most commonly, these symptoms or tendencies have been present for a long time, often since teenage years, and it is not uncommon to have a family relative with a similar coping or personality style,” Dimitriu explains.

That brings us to another common symptom—and a root cause—of BPD: a family history of unstable behavior. While a variety of factors contribute to the illness’s development, familial instability seems to be one of the bigger factors. “On a most fundamental level, it is believed that borderline children never knew they could trust their caregivers to be present consistently,” Dimitriu says. “This leads to patterns of acting out, neediness alternating with rage, and fears of abandonment. Inconsistent as well as overly intensive parenting is sometimes to blame. These parenting conditions often result in a child’s distrust of their own self and ability to relate to people in the world.” According to a paper published in The Lancet, borderline personality disorder is frequently associated with adverse events that occur during childhood. Those events might be the result of parental negligence or abuse. Psychologists also believe that BPD has a genetic component. However, that doesn’t mean the situation is hopeless; while some people may be genetically predisposed to BPD, they can still respond well to treatment.

The good news: People with BPD have options for treatment.

There’s no standardized treatment for borderline personality disorder, but cognitive behavioral therapy (CBT) seems particularly effective. One paper found CBT provided a “gradual and sustained improvement” in outcomes for BPD patients, reducing serious incidents and improving social functioning. CBT, by the way, is a type of psychotherapy administered by a trained psychologist. The patient is compelled to challenge negative thought patterns, eventually reducing the feelings of instability that drive their actions. “I was worried about taking medication, but for the most part, my [therapy] sessions were the biggest part of my treatment,” Ashley says. “It’s still a struggle. I think it’s always a struggle, but it’s a lot easier to get by when you understand where the negativity is coming from, and what you can do to sort of stick a wedge in it.” With that said, before seeking treatment for BPD, it’s important to make sure a person actually has the condition. We’d really like to stress this point: Only an experienced psychologist or psychiatrist can make that diagnosis.

“Don’t tell them that they’ve got this condition or that condition, just get them to a therapist’s office. There’s no reason to live in misery. My mental health problems don’t run my life—I run them.” —Ashley, a 32-year-old diagnosed with BPD
“Before anything is called a personality disorder, it is important to rule out true psychiatric conditions—such as depression, anxiety, or bipolar disorder—which can often overlap with BPD,” Dimitriu says. “Reducing stress and improving mood can play a big role in mitigating symptoms that may look like borderline personality.” As Dimitriu explains, psychological issues are complex, and a single self-harming incident doesn’t mean that a person has BPD or that they need to pursue a particular course of treatment. However, major mood swings should be taken seriously.

Don’t assume a person’s simply acting out to be dramatic.

“Desperate people do desperate things,” Dimitriu says, “and I often give the example to my patients of how irrational a drowning person may appear. There have been instances of a desperate drowning person drowning their rescuer [or] lifeguard; reducing depressive symptoms or anxiety can definitely lead to less desperate thoughts and actions, which can certainly improve, to some degree, the rage and instability seen in borderline behavior.” Because the symptoms of BPD overlap with the symptoms of other conditions, psychologists will need a detailed patient history in order to recommend treatment. “An important point worth noting is a higher incidence of bipolar disorder in borderline personality,” Dimitriu says. “One key difference is that bipolar patients will have longer periods of time during which they appear ‘stable.'” Bipolar disorder also needs treatment, of course. The most important takeaway: If you know someone who may have BPD or who experiences major mood swings, urge them to get help. “Don’t tell them that they’ve got this condition or that condition, just get them to a therapist’s office,” Ashley says. “There’s no reason to live in misery. My mental health problems don’t run my life—I run them.”