Infant ear piercings are a huge source of controversy in the parenting world. We got some experts to weigh in on the practice. 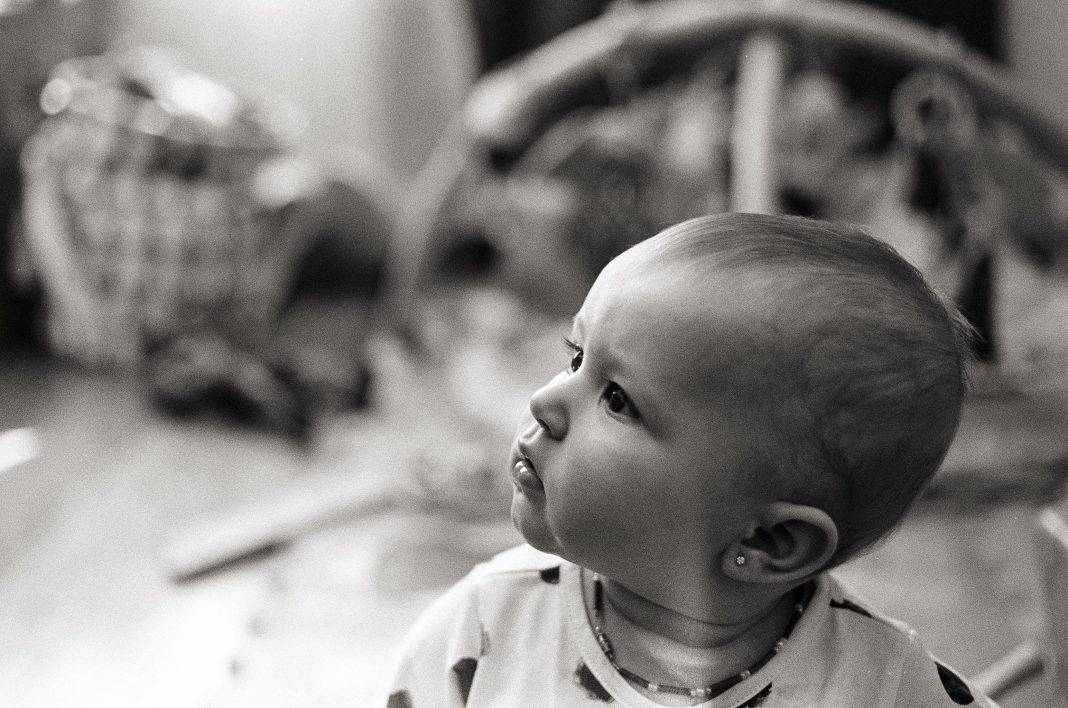 Nothing guarantees a dramatic, viral response quite like posting about a controversial parenting choice on social media. Parents of the internet love to share their feelings about everything from breastfeeding to wrangling rebellious teens, and a single post on Instagram is enough to create a massive response. That’s exactly what happened when Katie Price, an English television personality and mom with 1.8 million followers on Instagram, shared pictures of her infant daughter in 2016. In the pictures, her daughter is sporting brand new earrings, and her followers had a lot to say about her choice. One photo, captioned “Gorgeous Bunny bops,” has since received nearly 7,000 likes and numerous comments debating baby ear piercing. Some commenters went as far as to accuse Price of child abuse. https://www.instagram.com/p/BBNc1_SyR4E/?utm_source=ig_embed “…it’s pointless pain for what?” commented @chloeforde6. “Children should be allowed to communicate what they need…hopefully the UK will review the laws around this.” Other users took to Price’s defense, calling baby ear piercing a normal practice and sharing their own stories of piercing their kids’ ears. One mom, posting under the username @mommajosieb, shared that her daughter’s ears were pierced at her pediatrician’s office. Another user, @shann_fitz, shared that her mom had her ears pierced as a baby, and she said she was glad for the experience. “I can’t thank her enough because I wouldn’t have anything else pierced cause I’m scared,” she wrote. Price isn’t the only mom to get negative attention for the choice to pierce her baby’s ears. In 2017, a video of an infant getting their ears pierced was shared on a page devoted to piercings; it received 3.6 million views and a landfill of negative comments accusing the mother of child abuse. The video has since been removed, but the controversy lives on. Viral posts like these draw attention to a longstanding debate—are baby ear piercings a harmless practice, or are they unethical acts performed before the child can consent?

Are piercings traumatic for infants?

The main argument for those who criticize the choice to pierce an infant’s ears is that it is a traumatic experience for children. Because it is a painful experience, many believe that children should be allowed the opportunity to consent to the procedure. This means waiting until the child is older, perhaps in their teens, when they can weigh the decision themselves. As it turns out, child development professionals are pretty split on the debate. “The actual memory of painful procedures such as piercings may be forgotten, but that does not mean that the trauma of the event is without psychological consequences for little children,” says Elizabeth Berger, MD, the author of Raising Kids with Character, who personally believes that piercings should wait. “This is an area which is not fully understood scientifically, but most experts feel that children should be spared pain whenever possible.” Mayra Mendez, PhD, a licensed marriage and family therapist, takes a different stance. She notes that infant ear piercing has been practiced for thousands of years by some cultures, and she doesn’t see the evidence that there is any lasting trauma associated with the practice. “Do we see long-lasting trauma effects or anything that’s notable to speak about in terms of compromising emotional regulation? I have not seen anything along those lines, but that doesn’t mean it doesn’t exist,” she says. Sharon Somekh, MD, a pediatrician, parenting consultant, and founder of parenting resource Raiseology.com, shares her own experience as a pediatrician who has performed many ear piercings in a medical setting. “When piercings are done at a young age, I usually recommend between [the ages of] 4 and 9 months, the babies will not remember it,” she says. “The pain is truly limited to the moment of piercing, and within one to two minutes, babies are usually as happy as they were before.” Somekh warns against waiting until the babies are older. After the baby is a year old, she says, they’re more active, and this makes the piercing more difficult and potentially traumatic.

What are the risks of baby ear piercing?

Piercing your baby’s ears doesn’t come without risks. No matter the age of the child, piercing comes with the risk of infection. The American Academy of Pediatrics recommends that parents wait until the child is old enough to care for their ears themselves, keeping them clean to avoid infection. However, given that the vast majority of piercings take place in a sterile environment, Somekh cites the risk of infection as minimal. The development of keloids (the round, solid scars that sometimes develop on earlobes) is also a risk associated with piercing, though they’re most common between the ages of 10 and 20. People who are prone to keloids should avoid piercing their child’s ears, according to John Hopkins Medicine, but if this isn’t an option, they should do it before the child turns 11.

I treat a lot of keloid scars after ear piercing, yet patients are not warned of the risk. Be aware, especially if you have keloids already.

There is also a risk of an allergic reaction. Sensitivity to metals commonly used in earrings, like nickel, are fairly common, according to the Mayo Clinic. Typically, a nickel allergy is characterized by a rash, itching, and blisters.

Infant ear piercings have a long history of stirring up controversy on and offline. In 2015, a petition in the United Kingdom gained serious traction. Petition creator Susan Ingram addressed her plea to the UK’s Minister for Children, calling piercing an infant or toddler’s ears “a form of child cruelty.” Although the petition hasn’t resulted in action, it is still being signed and has reached 86,664 signatures since it was first posted online. Controversy also occurs on a local, social level. Parents might get pushback from their family or, like mom Jessica Zeehandelar, they might be criticized by their friends or support systems. “I had my daughter’s ears pierced once she turned four months old,” she tells HealthyWay, explaining that she chose that age because she knew her baby wouldn’t be able to tug on her earrings. She wanted to be in control of keeping them clean and free of infection. As she expected, it was a low-drama event. Her daughter cried for less than 30 seconds and still has healthy piercings two years later. What did surprise her was the pushback she received from her online breastfeeding support group. “I had no idea this was such a controversial subject,” she continues. “There were women who were outraged at the mere thought of piercing a baby’s ears. Many of those women claimed that this is the body of the baby, I shouldn’t be making these decisions for her, I should wait until she is older and can decide for herself.” Despite the criticism, Zeehandelar is happy with her choice and is certain she would make the same choice again if she were to add another girl to her family.

Another aspect worth noting is that baby ear piercing is often a cultural practice. For most parents, this isn’t a choice they make on a whim. Instead, they are honoring a longstanding tradition. “[Infant ear piercing] is very much culturally informed,” says Mendez, “and we need to respect the cultural boundaries of the family.”

I'm half Mexican, ear piercing on a baby girl is mandatory at like 3 weeks old. At 7 you're wearing gold hoops.

“It’s such a Latin thing,” Karla Martinez de Salas told Patricia Garcia of Vogue. “In the U.S., it’s more of a coming-of-age thing. But in Mexico, it’s just like, you’re a girl, your ears get pierced in the hospital.” Infant ear piercing is common in Latin American countries in general, Garcia wrote. Her ears were pierced when she was a few days old, a common practice in her native country of Venezuela. Nadra Nittle, an African American who has had her ears pierced since she was an infant, wrote for Racked that ear piercing is common for girls of color. In her family, it is a practice that extends back many generations.

For parents who do decide to have their baby’s ears pierced, safety should be the primary concern. There are risks associated with the practice, but they can be mitigated when parents are educated on safe piercing and upkeep of the piercings. “For the most part, if we look at cultures that actually do practice baby ear piercing as early as within those first weeks, two weeks of birth, the conditions just need to be right,” says Mendez. Like any piercing, infant ear piercing should be done by a trained piercer in a sterile and sanitized environment. After the initial piercing, parents should clean the piercings twice a day—the Mayo Clinic recommends using soap and water, while the American Academy of Dermatology (AAD) recommends using an isopropyl-dipped cotton ball or swab. Before touching the piercings—some experts, like those at the AAD, recommend twisting the earrings a few times a day to keep the hole intact—parents should always wash their hands. One additional note: Should you decide to pierce your infant’s ears, go to a professional. Make sure they don’t use a piercing gun (they aren’t recommended by the Association of Professional Piercers for a number of reasons, ranging from the fact that they can’t be completely sterilized to the fact that they can cause blunt force trauma to surrounding tissues), and instead ensure the piercer uses sterile hollow needles. In Mendez’s professional opinion, avoiding trauma associated with piercings is all about the diligence of keeping it clean. If the piercing becomes infected, the baby can experience lasting pain and discomfort, and this is much more serious than the initial pain associated with the piercing. “If the parent doesn’t take care of it, then we complicate the matter,” she says. “But the procedure in and of itself … it’s forgettable. It doesn’t really last as a traumatic memory.” Ultimately, this is an individual decision. Parents can and should be trusted to weigh the risks of practices like baby ear piercing, making the decision they believe is in the best interest of their child.