How To Safely Test Makeup In The Store

Can a mall makeover lead to a horrible skin infection? Not with these tips it won’t. At least, probably not.

At its best, makeup gives us the confidence to feel our best. We highlight our brows, line our eyes, blacken our lashes, rouge our cheeks, and paint our pouts. We research the best products, we see samples in stores, we get free makeovers at department store counters—and we still spend thousands of dollars over a lifetime to feel beautiful. Ah, the price of beauty.

But some women have paid a much higher price. You may have heard of Katie Wright, a woman from Austin, Texas, who made headlines last summer. In a social media post, Wright wrote that she thought she had a “giant under the skin pimple” by her eyebrow and innocently squeezed it, as many of us would have done.

Within an hour, Wright knew something was wrong. The area swelled significantly. She felt like it was going to explode. Wisely, Wright went straight to the hospital.

She was diagnosed with severe cellulitis, a type of staph infection. Physicians watched the young woman closely, as staph can easily spread to the bone, muscle, and blood. The location of her infection was too near her eyes and brain for their comfort. They acted quickly, as cellulitis can easily become life-threatening.

the swelling difference from the Staph pic.twitter.com/elXbLnhLfG

Wright believes she acquired the infection from a makeup brush she used frequently on her eyebrows but never cleaned. Shocking pictures of her red, swollen face quickly went viral on social media. Wright tweeted that she had become famous for “being ugly.”

Wright is not alone, and even if you keep your own brushes ultra-clean, you might still be at risk…if you sample makeup in a store.

Makeup Brushes That Are Actually Eco-Friendly

Here’s the damage dirty samples can do.

In October 2017, a woman filed a lawsuit against Sephora claiming to have contracted oral herpes from a lipstick sample in their store. The alleged incident took place in 2015, when Elana Davoyan sampled the in-store lipsticks.

Davoyan is suing for $25,000 in damages for emotional distress, according to Today‘s coverage of the lawsuit. Prior to sampling the lipstick at Sephora’s makeup counter, she says, she did not have herpes. Davoyan claims she has been adversely affected due to the unsightliness of the sores now appearing around her mouth. The case is still pending.

In 2011, Mary Zorcik, a sales associate in a department store out of Forest Hills, New York, told Prevention that she contracted a horrible case of conjunctivitis the year before. The infection was so bad that she couldn’t wear her contacts for two weeks, and it may have been a result of contaminated samples.

Meanwhile, in a 2004 study out of Rowan University, Elizabeth Brooks, a professor and biological sciences researcher, found makeup samples to be harboring all sorts of contamination. Brooks found E.coli, staph, and strep in the samples, she told the Los Angeles Times in 2010.

The two-year study revealed that on Sundays, a shocking 100 percent of all the makeup samples (skin, eye, and lip makeup) were contaminated with a bacteria or virus of some sort. Most of it was staphylococcus aureus, a virus that usually doesn’t become a problem unless it’s transferred from the skin’s surface to the nose or eyes. But doesn’t makeup tend to get pretty close to our noses and eyes?

The good news is that makeup doesn’t offer a lot of food for pathogens. The 100 percent contamination found on a Sunday would slowly die off as fewer and fewer visitors transferred new germs into the makeup during the slow part of the week, Brooks told her university’s website. In a later interview with the Wall Street Journal, Brooks clarified that the bacteria was “all surface contamination. If the ladies wipe it off, we can get it near zero.” 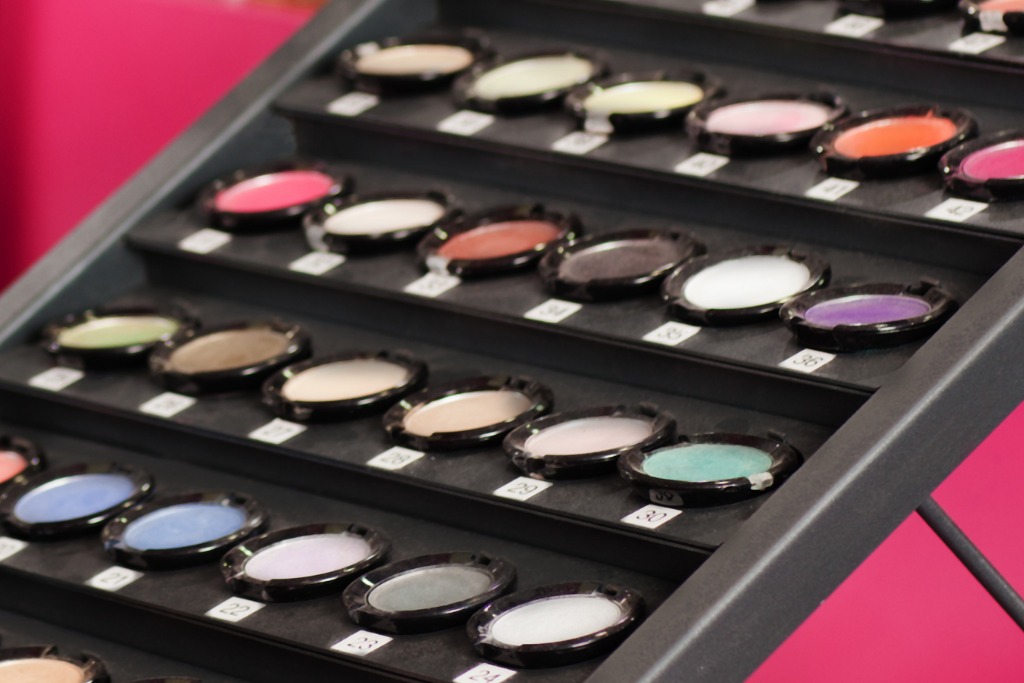 That’s if you wipe it off, though, and this still brings up important questions for anyone who buys cosmetics: How risky is testing makeup in a  store? If this can happen with a brush at home, as it may have with Wright, what about with brushes that are used by hundreds at the makeup counter? Or during free makeovers? Ultimately, how can you sample makeup safely?

Following these seven tips will help make your trip to the makeup counter as safe as possible.

Double-dipping spreads bacteria. If you want to sample a mascara a second time, ask for another wand. Know, too, that not everybody before you will be such a good citizen—always wash your face after a mall makeover, Brooks told the Rowan University news site. 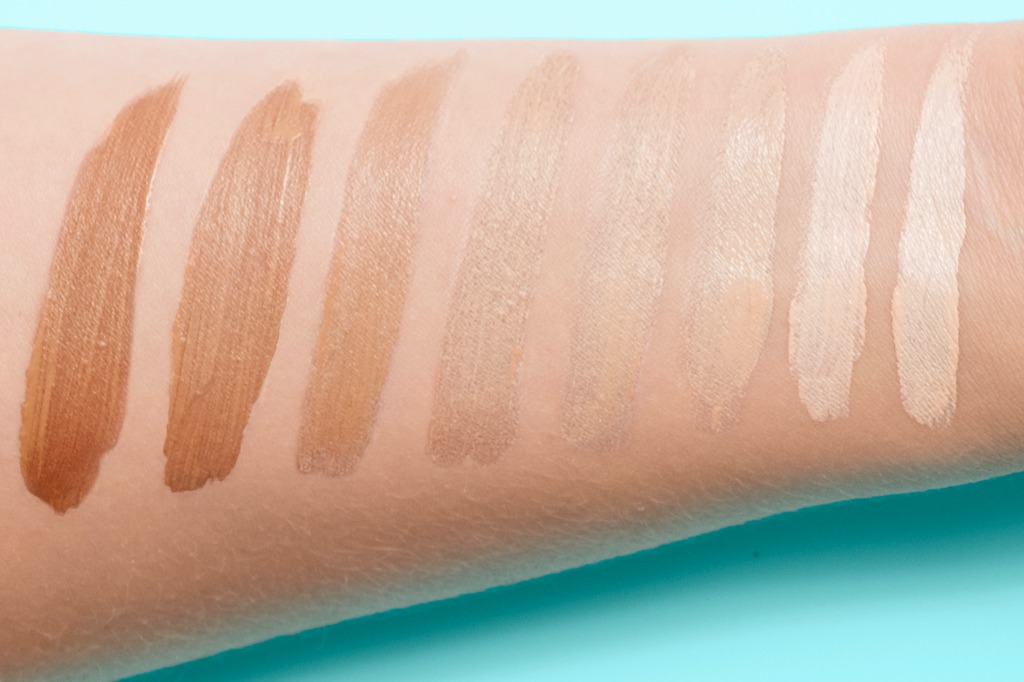 To be extra safe, test everything on your wrist. Be sure to wash thoroughly with soap and water after you do, though, so any germs can’t find their way to your nose or eyes.

Before getting a “free” makeover in a store, ask some questions.

“You should be careful about using brushes that have been used on other people,” warns Alan Parks, MD, a board-certified dermatologist based in Ohio. “Make sure you see the brush being cleaned using some kind of [disinfectant] … .”

Parks isn’t wrong. The last thing you want is a free sample of pink eye with your makeover.

Celine Thum, MD, of Paradocs Worldwide has an even better solution. While she seconds that you should make sure brushes are cleaned before someone uses them on you, she goes one step further.

“Better yet, bring your own brushes!” Thum recommends. Also, she says, “before trying on [a] new color, have the employee scrape or sharpen off the top layers of exposed product.”

3. But if you’ve gotta use them, go disposable.

Use those disposable, one-time-use mascara wands, cotton swabs, and eyeshadow applicators on the makeup counters. They are there for your safety. Just hope that the person before you didn’t double-dip.

“If you are going to try out makeup in a store, it should only be products that you can apply using some kind of q-tip or other disposable applicator, where you know that people aren’t actually touching the product,” warns Parks. “You even have to be careful in these cases, as you never know when people may have used their fingers instead.”

4. Skip the jars. Go tubing instead.

Never stick your fingers into a jar of cream, urges Parks. They’re a breeding ground for bacteria, and you may be the hundredth hand of the day to touch it. 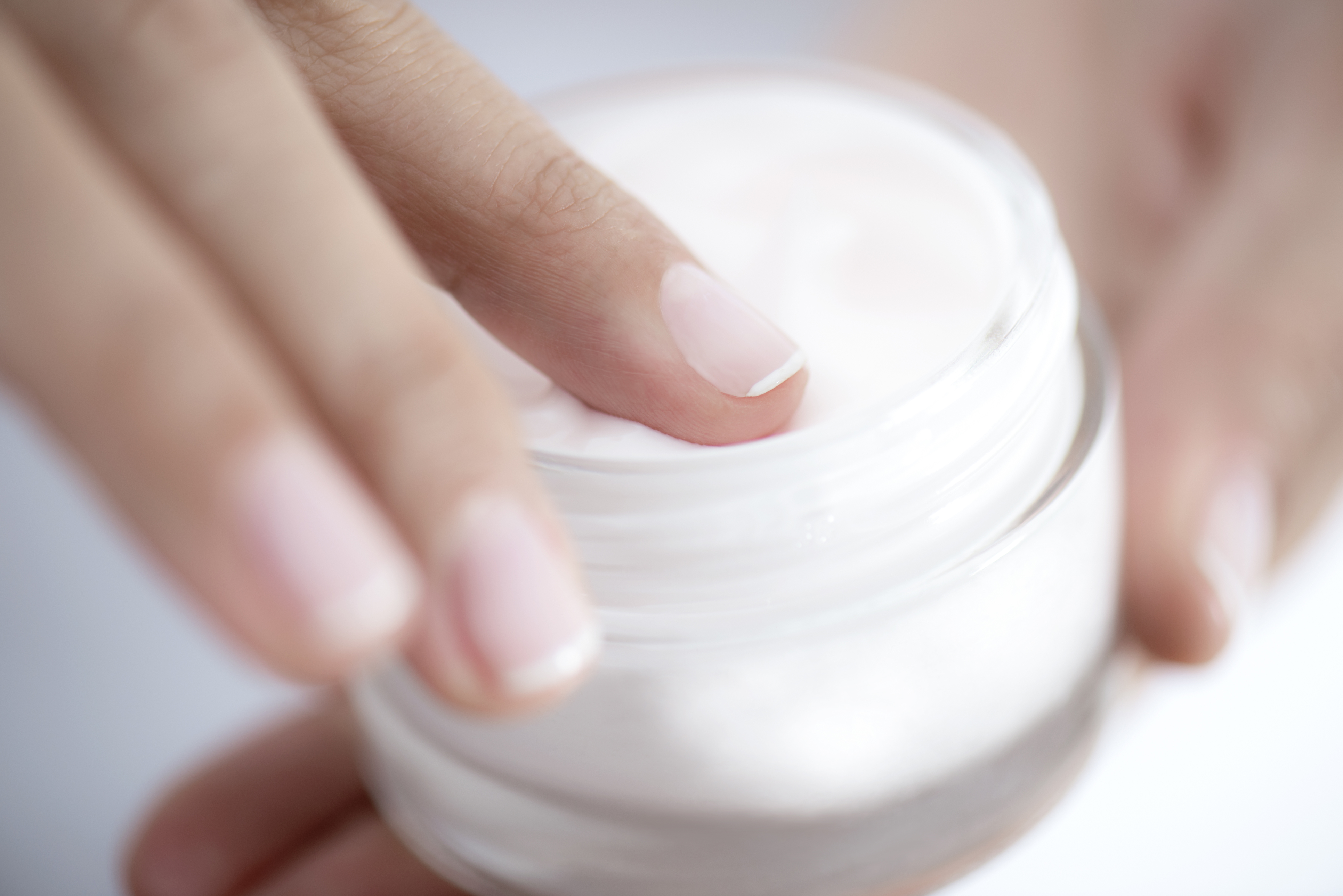 “Think about all the germs that go into those jars when so many people are putting their hands in them,” Parks says. He also cautions against sampling products that go around the eye area because, remember: conjunctivitis.

When possible, opt for a squeezable tube, and only use it after wiping the tip with a tissue or—you guessed it—a disinfecting wipe.

No tube? Makeup that comes in a pump is safer than sampling from a jar, as well, because it’s a whole lot harder to “double-dip” with a pump—unless you have much smaller fingers than we do. The odds of someone before you contaminating it are extremely low. Pump away, germ-free!

Take disinfectant wipes with you to the store and wipe down anything that touches your face, like a lipstick tube or an eyeshadow brush, suggests Arisa Ortiz, MD, director of laser and cosmetic dermatology at UC San Diego Health.

Wipe off the end of the lipstick with a tissue or, better yet, a disinfectant wipe. Or scroll the lipstick all the way and use a cotton swab to sample from the very bottom of the stick (after wiping it off, of course). 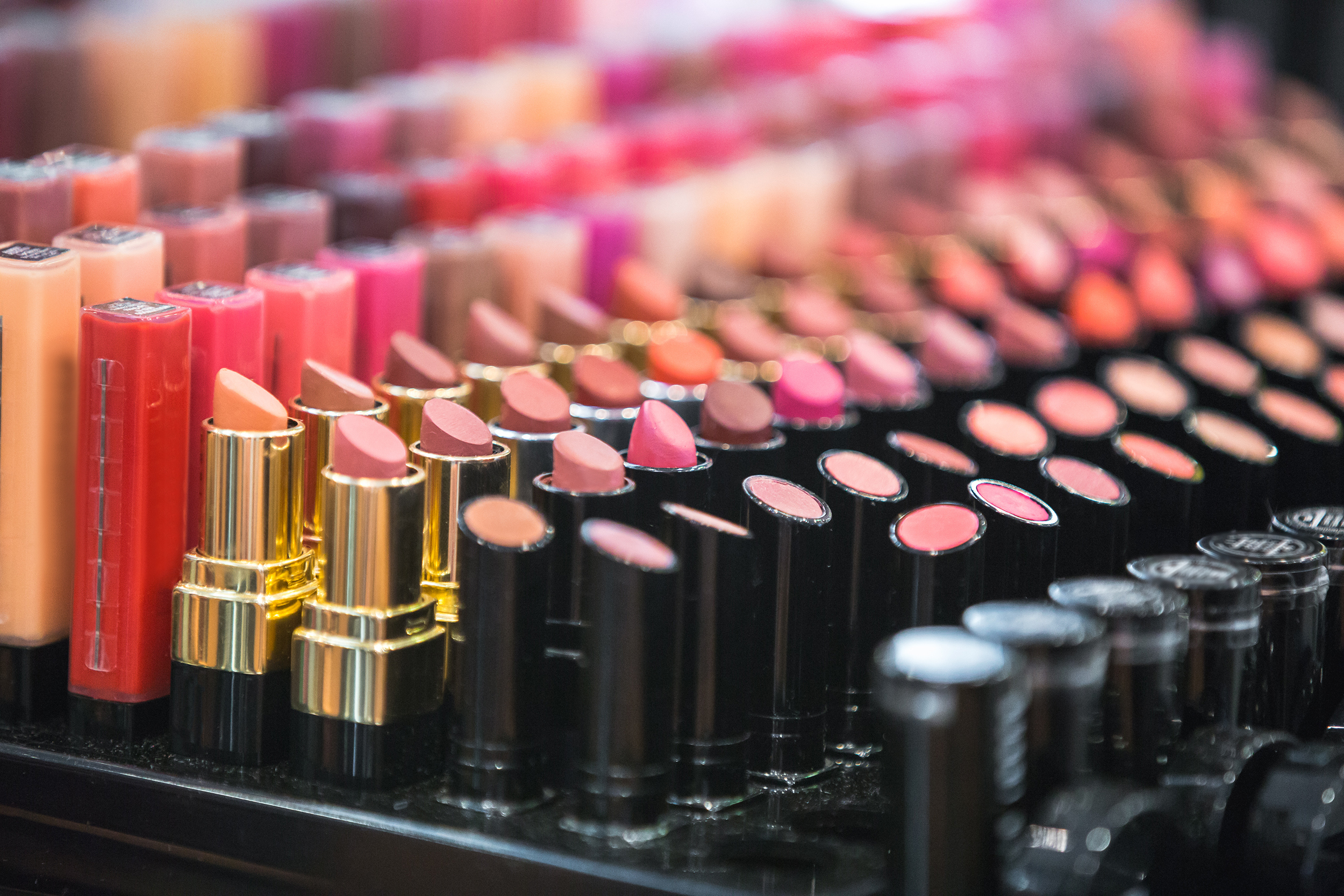 Brooks told the Los Angeles Times that wiping the stick is probably sufficient. But she also added that she wouldn’t let her teenage daughters sample lipstick unless it was in an individual tester, so take that as you will.

At some stores, you can actually try on makeup samples virtually. At Sephora‘s largest New York location, you can “Tap and Try” their makeup at a station that uses face recognition software to let you sample the latests shades and looks. At MAC stores, you can use their new Augmented Reality mirrors to see how a variety of eye makeup combinations would look on you.

L’Oréal has even created an app so you don’t even need to leave your house to try makeup before you buy it. Their Makeup Genius app takes a picture of your face, then shows you how you’d look wearing different shades and products. Sephora has a similar app.

“If you take one thing away from this, please see how crucial it is to thoroughly wash your brushes and tools,” she told a reporter for HuffPost. “I urge everyone to take an extra step in your cleaning routine to prevent yourself from a horrifying, painful and potentially life threatening infection.”

Most experts suggest washing brushes frequently and replacing them when they start to look worn, too. 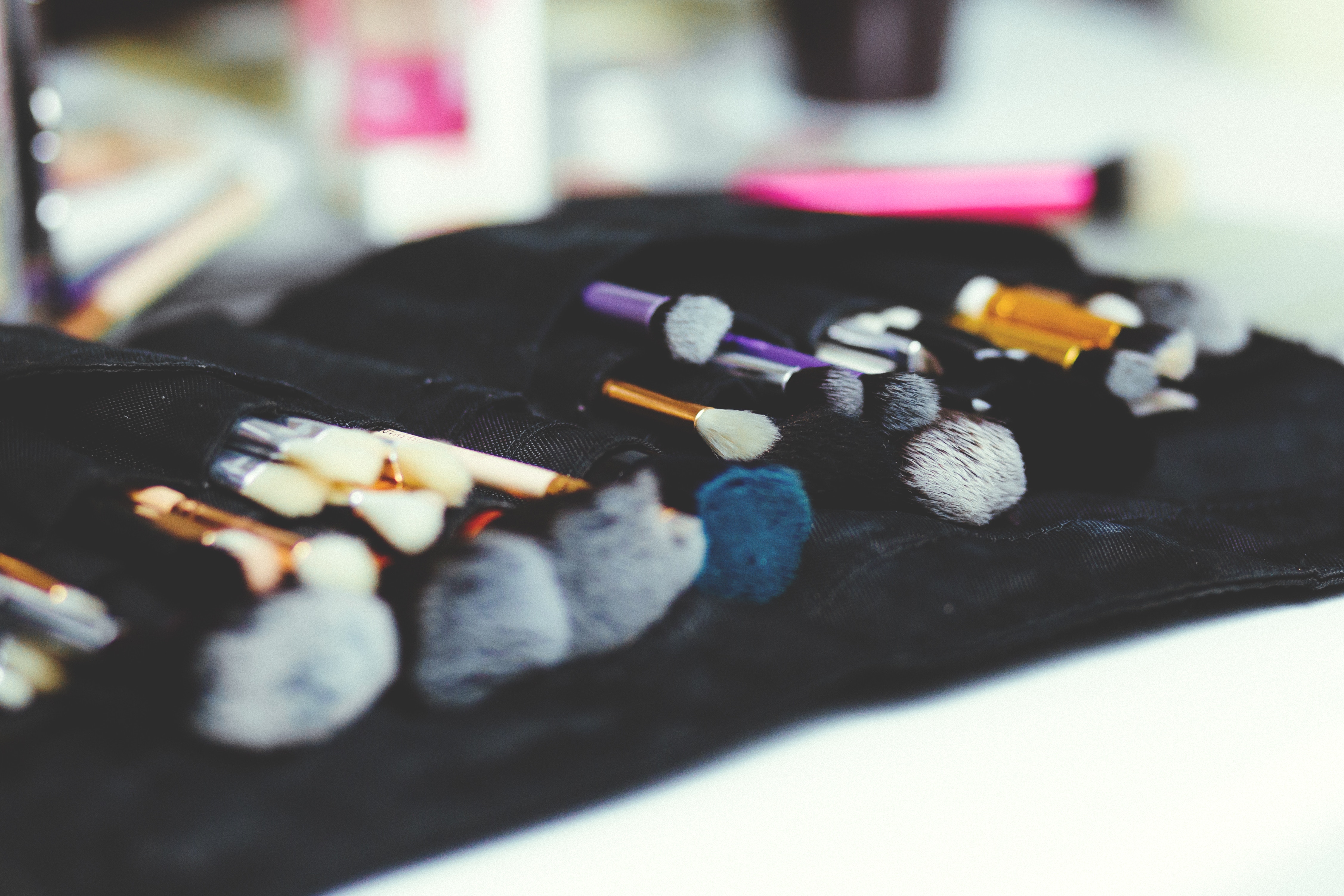 This is important stuff. It wasn’t just Wright’s health that suffered from her infection. Her pocket book took quite a hit, too. Since Wright’s pictures went viral, she has been trying to raise money for the medical expenses with a GoFundMe campaign.

“Unfortunately, this was not a cheap lesson to learn. I was left with thousands of dollars in hospital bills that I haven’t been able to pay yet,” Wright wrote on her fundraising page. “The doctors of St. David’s [Hospital] saved my life and it would mean the world to be able to pay them back for their services.”

Unfortunately, Wright’s experience isn’t exclusive to the home. Luckily, though, there are some safe ways to sample makeup—thanks to disinfectants, disposables, and technology that won’t put you at risk of contracting an unwanted viral or bacterial pathogen. Beautiful, isn’t it?