Do you like globs of mayonnaise and gelatin? If not, you're going to hate these throwback meals. 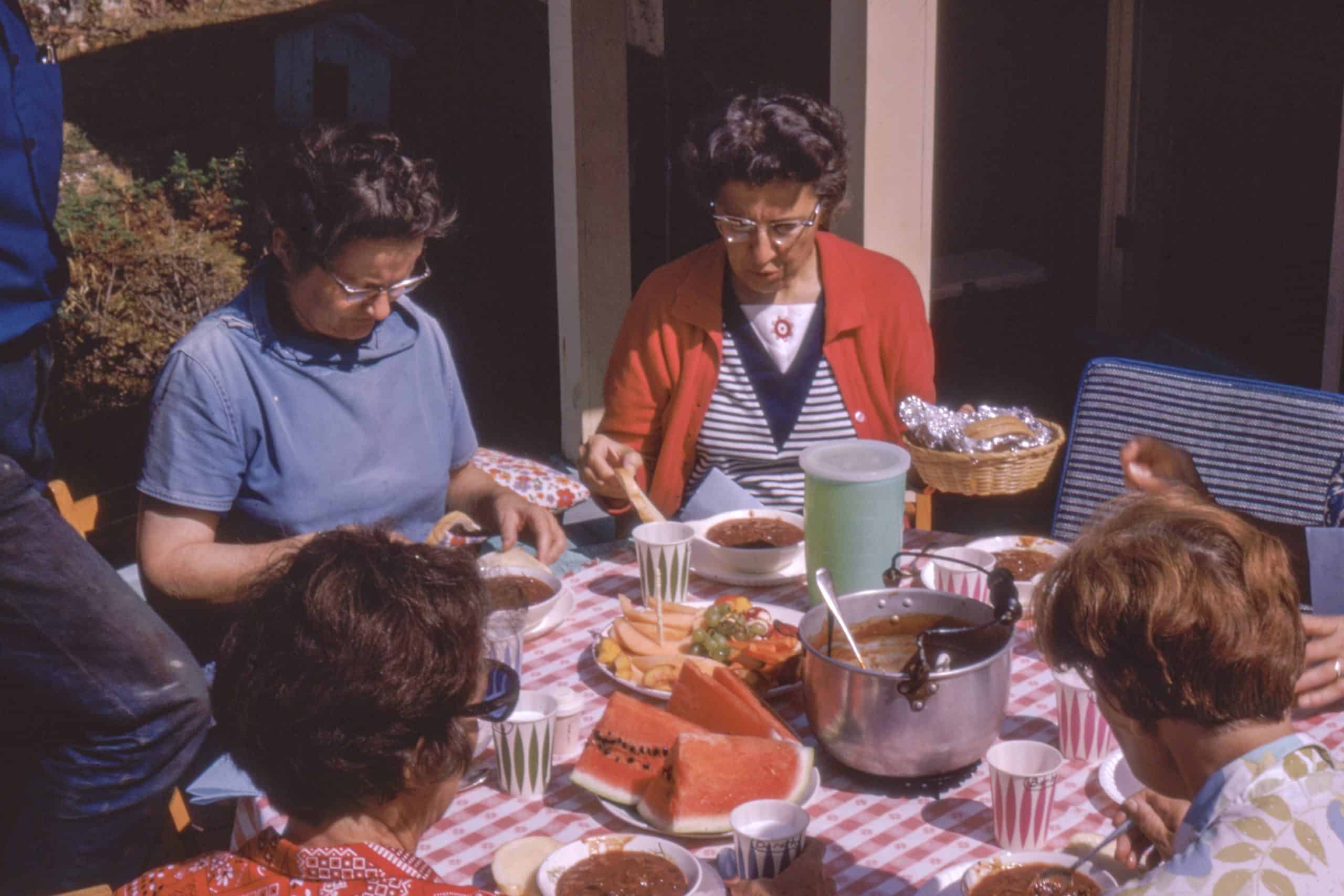 Be happy none of these dishes show up at Thanksgiving or Christmas dinner anymore. It’s hard to believe, but at a certain points in history, people gleefully ate what we now consider appalling science-lab concoctions.

Now, you might not consider this meal a “salad” or “perfection,” but at the time of its creation, this molded monstrosity was a hit. In 1904, Mrs. John E. Cook of New Castle, Pennsylvania, won third place in a recipe contest with her Perfection Salad submission. That recipe got her $100 and a brand new sewing machine. Not part of the prize? Its fate of making later generations queasy. This salad stuck around for decades, sometimes even finding its way onto the table at holiday dinners. It’s made of unflavored gelatin, lemon juice, vinegar, shredded carrots and cabbage, chopped celery and green pepper, and a little bit of apple juice. The real trick to blowing people away with this dish is using the most impressive Jell-O mold you can find. Because nothing screams “Happy Holidays” like a jiggling tower of shredded vegetables.

This 1940s recipe tries to combine what was once an exotic flavor (bananas) with comfort food (ham and cheese) but fails to really make it work. Caribbean recipes use ham and bananas together, but that wasn’t even an option for American tables until the fruit made its way to the U.S. in the 1880s. For this recipe, you need six thin slices of ham, six peeled bananas, mustard, hollandaise mix, and light cream. Spread each slice of ham with mustard, wrap one around each banana, and bake in a casserole dish for 10 minutes. While the bananas are in the oven, prepare the hollandaise sauce mix with the cream. Once the sauce is finished, pour it over the bananas and bake for just five more minutes. You’ll know when this meal is ready to eat when it looks like a shiny yellow disaster.

The term chaud-froid (French for hot-cold) perfectly suits this hot (or, in reality, cold) mess of an entree. The chaud-froid has many origin stories, but one of the more popular versions involves the Maréchal de Luxembourg eating his dinner late. The maréchal invited guests over to his château for a dinner party one evening but then had to leave right before dinner was served. The guests ate without the maréchal, but when he returned, he asked for his meal to be presented. Every dish was brought out as it had been given to the guests earlier—except for the chicken. That particular dish was finished with egg yolks, which, if reheated, would curdle. The chicken was brought out cold, and the maréchal loved it. It was then he coined the phrase “chaud-froid,” which refers to a dish made hot but served cold. Chicken chaud-froid salad might not sound too bad, but the recipe basically turns chicken breasts into gelatinous, mayo-laden blobs. We’ll pass on this one.

Here’s the perfect snack, beverage, or light meal to serve to your friends and family if you never want to see any of them again. The Jellied Tomato Refresher was originally a 1970s Weight Watchers recipe, because apparently if you wanted to lose weight, you could only drink frozen tomato juice at parties. To make the Refresher, start with unflavored gelatin, water, and tomato juice. Mix them together and add dehydrated green pepper flakes, artificial sweetener, beef broth, Worcestershire sauce, garlic salt, and ground cloves. Chill in the refrigerator until the gelatin has set. To serve, mix lightly with a fork to add some texture, scoop into a glass, and garnish with a pepper slice. It’s just like tomato juice, but you have to chew.

Yes, you read that correctly. Who wouldn’t want to show up to a get-together and dig into a well-crafted, terrifying pile of liver sausage made to look like a pineapple? None of us—meaning this 1950s Better Homes and Gardens recipe doesn’t translate well into the 21st century. To build your pineapple base, mix one pound of liver sausage with lemon juice, Worcestershire sauce, and mayonnaise. Using a medium sized jar as an internal pillar, form the meat into a pineapple shape. Chill the base in the fridge while you whip up its “frosting.” The yellow slather is made of unflavored gelatin, water, and mayonnaise. Cover the liver sausage with a thin layer and chill once more to allow the coating to solidify. Add artistic markings, olives, and even a real pineapple top to complete the piece.

Everyone agrees that the best way to eat cheese is frozen, so make sure you include this nonsensical appetizer on the menu of your next dinner party. This frozen cheese salad is made from cottage cheese, blue cheese, buttermilk, lemon peel, Worcestershire sauce, and barbecue spice. Blend all the dairy products and spices together, mold in a tray, and freeze for at least three hours. Remove the cheese block from the freezer 15 minutes before serving and line the platter with broccoli florets for show (because obviously you can’t dip the florets into frozen cheese). Et voilà, you’ve earned yourself a ticket out of making anything for a dinner party ever again.

The 1950s American culinary scene was decidedly obsessed with turning things into loaves that had no business being served in any kind of molded form. This tuna macaroni recipe is no different. Why you would need a tuna macaroni entree is beyond us, but here it is. To make this loaf, heat evaporated milk with mustard, Worcestershire sauce, and grated American cheese. Once the cheese is melted, add olives, chopped celery, drained tuna, bread crumbs, and cooked macaroni noodles to the sauce. Place in a greased loaf pan and bake for about 30 minutes. Let the loaf cool for a minute before you remove it from the pan. Serve with additional cheese sauce if desired.

Here’s another molded meal that is in the running for worst name in the history of cooking. To make this treat you use your favorite ringed Jell-O mold, gelatin, and a whole lot of dried beef. Combine gelatin with water, milk, mayonnaise, and mustard. Set aside and chill for at least 30 minutes until it has thickened but not fully set. Then stir in your lima beans, celery, cheese, lemon juice, dried beef, and onion. Pour the mixture into a mold and refrigerate for three hours. Basically tasteless, boring celery leaves are the official garnish for this thoroughly unappetizing meal. Enjoy.

Now, this hors d’oeuvre sounds completely normal and even potentially tasty. Just don’t open your eyes when you’re eating it. Lobster relish has never looked more terrifying than it does in this recipe, which recommends a presentation suggestive of the relished lobster’s ability to stand up and crawl off the table back to sea. This recipe starts off like all the others on this list, with our favorite ingredient: gelatin. However, this snack takes some real finesse to construct. First step: Heat the unflavored gelatin with vinegar, salt, and pepper to taste. When the mixture has cooled slightly, pour a small amount into a Jell-O mold and turn it to create a thinly layered coating. Repeat this process a few more times until there’s a solid barrier of gelatin on the mold. Press shrimp into the clear jelly for an avant-garde look. Next, mix together another batch of gelatin sauce with smashed cucumbers, salt, pepper, and green food coloring. Pour into the bottom of the mold and let it set. Once the green layer is firm, pack in the pieces of lobster. By the end of this culinary experiment, you should have a multi-colored, multi-layered seafood tower, held together by Grandma and Grandpa’s favorite new-age ingredient. Don’t forget to garnish with full crab legs—claws on and, table space permitting, hanging off the platter. And never complain about quinoa or flaxseeds again.