10 Common Product Combinations You Should Never, Ever Mix 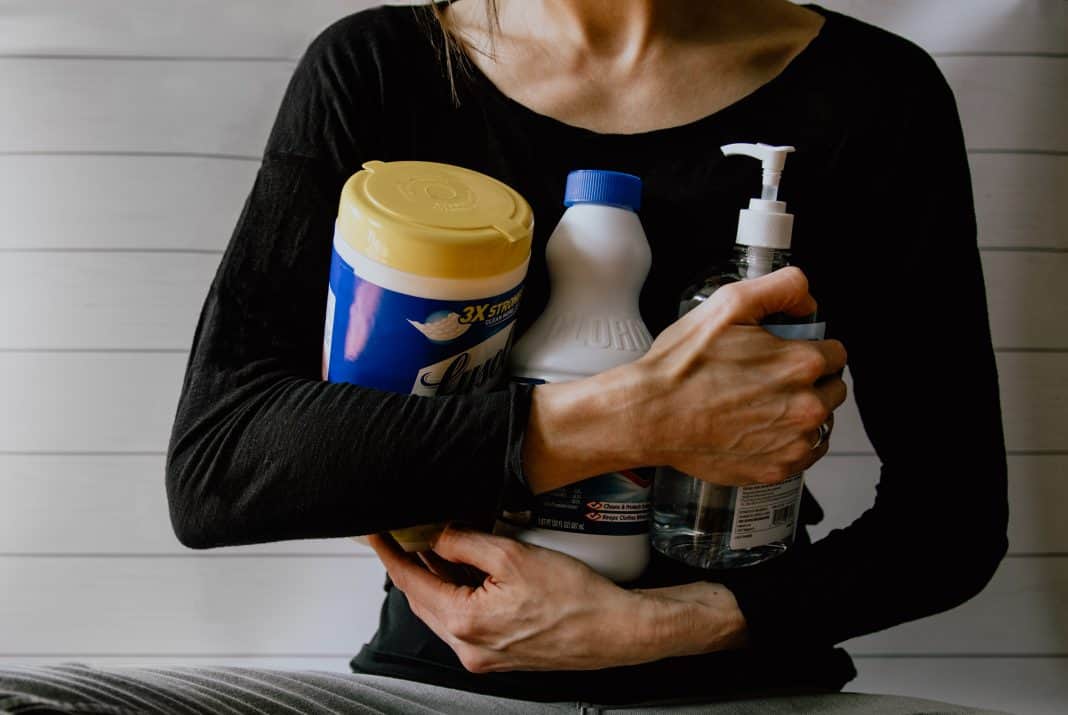 It is terrifying how many potentially disastrous products you have underneath your kitchen sink right now.

Or maybe you keep them in a pantry or a janitorial closet, but you see what we’re getting at. Totally innocent, common household products can combine with other totally innocent, common household products to become weapons that are probably banned by the Geneva Conventions. Chemistry doesn’t care that you need to clean your toilet; it’ll still go through with the reaction that transforms everyday cleaning sprays into toxic gasses. Health experts warn us to always read the labels on new cleaning products. Just because something isn’t labeled “one-half of poison gas” doesn’t mean that it’s free of chemicals that could very easily turn into poison gas. Study this list carefully, and if you plan to scrub the toilet, keep a close eye on the products you’re using. In fact, why even scrub the toilet in the first place? It’s fine.

There are some nice cleaning hacks out there that call for a quick scrub with white or apple cider vinegar followed by a spritzing of hydrogen peroxide. Those actually work. They’re great for disinfecting sensitive surfaces like cutting boards and even fruits and vegetables. Whatever you do, though, don’t try to speed things up by mixing both household products together in a single container. When combined, vinegar and hydrogen peroxide form the very corrosive peracetic acid. It’s not the kind of acid that will eat through multiple decks of your space ship, but it can cause plenty of damage without getting into Alien territory. That stuff won’t stop at just disinfecting your kitchen counter. It’ll also irritate your skin, eyes, and lungs. Too much can cause permanent lung damage. By all means, harness the disinfectant power of hydrogen peroxide and vinegar in combination. Just always keep them in separate containers.

This may be the highest-profile of all the cleaning no-nos, but people still manage to kill themselves by mixing these ingredients together. It bears repeating: Never mix ammonia and bleach together, not even if your toilet looks like a Jackson Pollock. The mixture reacts to produce chloramine gas, which is highly toxic. Also, it’s gas. That’s not something you want to go around inhaling. Carefully check labels before using multiple cleaning products; you might be surprised at those that list ammonia as an ingredient.

If you take anything away from this article, let it be this: Just don’t mix bleach with anything, except maybe water. When you add vinegar to bleach, the chemical reaction turns the mixture into chlorine gas. This caustic substance will burn you wherever it lands, whether that’s your skin, your eyes, or, worst of all, your respiratory system. Let’s keep the bleach solo, okay?

We weren’t kidding. Bleach doesn’t play well with others. Mix bleach and rubbing alcohol together and you’ll end up with a big pool of chloroform, which can wreak havoc on your nervous system. It will also irritate any part of you it comes in contact with. Oh, and to add insult to injury, bleach and rubbing alcohol also produce hydrochloric acid when they get together. The only thing that you should mix with bleach is water.

When just one of the batteries in your remote control goes dead, it’s tempting to grab the nearest AAA and get back to watching the tube. Don’t give in if you have multiple battery brands lying around the house. Despite working similarly, different brands of batteries have subtle differences in their chemical composition. Their voltages might not line up precisely. Mixing brands often leads to leaky batteries, and battery acid isn’t something you want at the heart of your most precious electronics.

Say you’ve got a clogged drain and just a bit of one type of drain cleaner and a full bottle of another. The last thing you want to do is blend them. A drain cleaner is strong stuff. It has to be to dissolve all the gunk that accumulates in drains and eventually causes a clog. Carolyn Forte is the director of the Cleaning Lab at the Good Housekeeping Institute, and she told the magazine Good Housekeeping that mixing multiple brands of drain cleaners is a terrible mistake. “I would never recommend mixing two different drain cleaners or even using one right after the other,” she said (their emphasis). “These are powerful formulas, and could even explode if combined.” Imagine explaining to your plumber that you accidentally blew up your pipes. That’s going to be an expensive fix. So read the directions on your drain cleaner bottle, and follow them exactly.

Unfortunately, this mixture is most likely to happen in your stomach. We can’t think of a reason to mix Red Bull and milk anywhere else. If you’ve just enjoyed a nice, frosty glass of milk and you start to get sleepy, don’t reach for the Red Bull to perk up. Coffee is probably a better bet. That’s because Red Bull instantly curdles milk like it was a witch in a bad fairy tale. The energy drink is pretty acidic, and milk proteins react with acids to form a salt. Then the casein, a particular protein found in mammal milk, clumps together in big gross lumps. (That’s a long way of saying that the milk curdles.) You’re not going to make any poison gas or cause an explosion, but you might cause an unfortunate episode of explosive vomiting. No burst of energy is worth that, trust us.

While we’re on the subject of household stuff you shouldn’t mix in the beaker of your belly, let’s add grapefruit juice and medication to the list. But grapefruit is just a giant bitter orange, right? How could that change the way pharmaceuticals work? Incredibly, grapefruit juice contains chemical compounds that interrupt the enzymes responsible for breaking down certain chemicals found in drugs. That means the substances are present in your system longer than their manufacturers intended. This can increase the overall level of the substance in your blood. In a worst-case scenario, so much of the substance can stick around that you end up overdosing on a typical dose. (Just to keep things confusing, in some cases grapefruit can keep your body from absorbing what it needs to from a medication, thus making the drug less effective.) Who knew this healthy breakfast could be so dangerous? If grapefruit is a regular part of your diet, be sure to talk to your doctor before taking any new prescription. They’ll be able to tell you if your medication will be affected by a giant pink orange.

Grapefruit juice isn’t the only morning beverage that can mess with your medication. It turns out that milk can also interfere with your antibiotic regimen. Substances in dairy products bind to certain antibiotics, preventing them from being absorbed in your body. That can ruin their effectiveness. Ask your doctor about dairy products whenever you get a prescription for antibiotics.

The internet is full of cleaning hacks that involve the combination of baking soda and vinegar. This mixture won’t cause poison gas or an explosion (unless you seal it in a bottle), but there is a very good reason that you should avoid it: It doesn’t really help clean anything. Vinegar is acidic, and baking soda is a base. Mix them together and what do you get? Neutralization! The result of this chemical reaction is mostly just water, which is easier to get out of the tap. Do yourself a favor and save your vinegar/baking soda for making model volcanoes erupt at the elementary school science fair.

Abby Piper
Abby Piper is an Editorial Intern at HealthyWay. She recently graduated from of the University of Notre Dame, officially marking her entry into adulthood (yay!). Fueled by copious amounts of coffee, she enjoys running, water skiing, writing, reading, watching baseball, and preparing for Christmas.